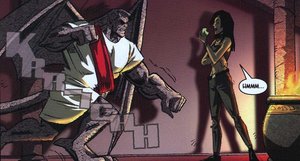 Thailog's toga not turning to stone

The Spell of Humility is a spell cast by the Roman Magus in C.E. 10 causing gargoyles' clothes and other items on their person to enter stone sleep with them, thus preventing nudity upon awakening at dusk. [1] The spell was clearly quite powerful since it managed to affect every gargoyle in the world (including those the Roman Magus was presumably unaware of such as the Mayan Clan) and continues to affect them throughout all time beyond C.E. 10. [2] The Roman Magus used a combination of various magical artifacts to achieve this amazing feat. [3] 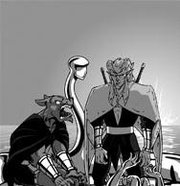 Yama's uniform not turning to stone.

In 997, Brooklyn, on his first TimeDancer journey, traveled to Castle Wyvern to recover Goliath's portion of the Phoenix Gate in hopes of getting back to modern Manhattan. Unfortunately, the item was in Goliath's belt pouch which was sealed at the time of the Magus' casting of the stone sleep spell, which meant the Gate was encased in a container of stone courtesy of the Humility Spell. The Phoenix Gate and belt pouch would not be uncased from stone until Goliath's awakening in 1994. ("Tyrants")

Behind the scenes, the spell was a convenient plot device used by Greg Weisman to explain why an otherwise natural process would have such an unusual and unnatural side effect. Weisman has joked that the Roman Magus "must have had the backing of ALL of Rome's Standard's and Practice's Executives". [5]

Rumor has it that Brooklyn may be in Caesar Augustus' court as the spell is cast on his TimeDancer journey. [6]