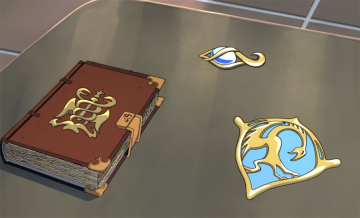 The Three Keys to Power.

The Three Keys to Power are the Grimorum Arcanorum, the Eye of Odin, and the Phoenix Gate. When united, they can transform their bearer into an almost invincible sorcerer.

It is thought that the Roman Magus was the first to unite the Three Keys, using them to cast the Spell of Humility over every gargoyle in the world. [1][2]

By 975, the Archmage was already coveting the Three Keys (presumably inspired by the Roman Magus's use of them); he had the Grimorum in his possession by this time, and sought to steal the Phoenix Gate as the next step to achieving his goal, though without success. ("Vows") [3]

Brother Valmont was also aware of the Three Keys to Power, and desired them as well. He took the first step towards this goal when he seized the Grimorum at the Battle of Rathveramoen, but was subsequently defeated by Brooklyn, losing the book to him. ("Tyrants", "Phoenix")

By various paths, the Grimorum, the Eye, and the Phoenix Gate all found their way into Goliath's keeping by 1995. He stored them in the clock tower until Demona and Macbeth, under the geas of the Weird Sisters stole the Three Keys later that year. ("High Noon") They and the Sisters then delivered the Three Keys to the Archmage, who united them by donning the Eye of Odin upon his skullcap, devouring the Grimorum (in order to provide a loophole that would allow him to enter Avalon with it), and wore the Phoenix Gate upon his chest. With these three objects combined, the Archmage was transformed into so mighty a sorcerer that he could even use the Phoenix Gate's powers without having to speak the Latin incantation to command it, and proceeded to attack Avalon as his first step towards world conquest. ("Avalon Part Two")

Goliath finally defeated the Archmage by tearing the Eye of Odin from his brow; once the Archmage lost the Eye (which had been compensating for the mixed magics), he was unable to control the Grimorum any further, which self-destructed, consuming him in the process. ("Avalon Part Three") [4] Goliath took the remaining two Keys into his keeping again, eventually returning the Eye to Odin and throwing the Phoenix Gate into the time-stream after Puck tried to trick Goliath into giving the Gate to him (the Gate reappeared in New York City in 1997, only to disintegrate, freeing the Phoenix in the process). ("Eye of the Storm", "Future Tense", "The Gate")

With two of the Keys thus destroyed, and the Eye restored to Odin, it is extremely unlikely that anyone will ever unite the Three Keys again.