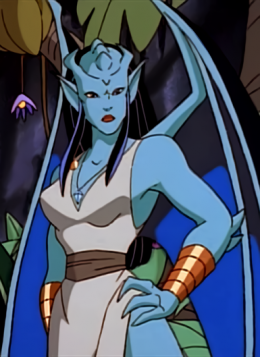 Turquesa is a gargoyle of the Mayan Clan.

Turquesa hatched in 1938. [1] By 1988, it was likely that she and Jade had become mates and she laid her first egg that year. At some point before 1993 she was entrusted with the Turquoise Pendant linked to the Mayan Sun Amulet, and thus received her name. [2] She was patrolling the rainforest with Zafiro, Jade and Obsidiana on the day in 1993 when a group of poachers looted the Mayan Pyramid and destroyed her clan. Fortunately, the rookery was undisturbed and the eggs of the clan, including the one she laid in 1988, will hatch in 1998. [3][4] Assuming she is still alive, she is expected to lay her second egg in 2008. [5]

Turquesa seems to have more familiar knowledge of the history of her clan. She is also Zafiro's second-in-command. [6]

In 1996, she helped defend the rain forest from Cyberbiotics, and from Jackal and Hyena in Preston Vogel's employ. Afterwards, she and Jade left Guatemala with Goliath, Elisa, Angela and Bronx to transport, plant and nurture various rare herb and flower species on Avalon while Zafiro and Obsidiana remained to protect the rain forest. ("The Green") After insuring that the plants were thriving on Avalon, Jade and Turquesa left the island for home, though it is likely Avalon took them to a few other locations first, possibly including New York City to retrieve the Mayan Sun Amulet from the Manhattan Clan. [7][8][9][10] They returned to Guatemala soon afterwards to rejoin Zafiro and Obsidiana in protecting "The Green". [11]

It is unclear if and how Jade and Turquesa's pendants were allowed on Avalon, as they were created by human sorcery. [12][13][14]

Like most Mayan gargoyles, Turquesa has black hair and a large crest on her forehead. She has the most common type of gargoyle wing (similar to Goliath's) and has turquoise and blue coloring. Perhaps her most unusual feature is that each of her elbows and knees sport several spikes.