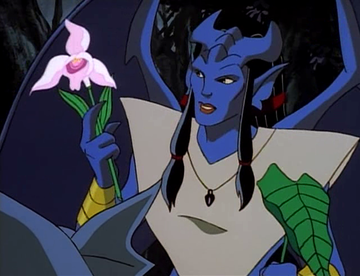 Obsidiana shows one of the many uses for native plants.

Obsidiana is a gargoyle of the Mayan Clan.

Obsidiana hatched in 1918. [1] At some point before 1993 she was entrusted with the Obsidian Pendant linked to the Mayan Sun Amulet, and thus received her name. [2] By 1968, it was likely that she and Zafiro had become mates and she laid her first egg that year. [3][4] She was patrolling the rainforest with Zafiro, Jade and Turquesa on the day in 1993 when a group of poachers looted the Mayan Pyramid and destroyed her clan. Fortunately, the rookery was undisturbed and the eggs of the clan, including one she laid in 1988, will hatch in 1998. [5][6]

In 1996, she helped defend the rain forest from Cyberbiotics, and from Jackal and Hyena in Preston Vogel's employ. During a battle with Jackal, a falling tree crashed into her and she apparently broke her right wing. A short rest in her stone sleep healed the injury, however. Obsidiana has limited abilities as a healer using local plants to make bandages, medicines, potions and other useful items. She used these skills to protect a wound Bronx received from Hyena. She also found Elisa to be unusual for a human and was fond of her. After Cyberbiotics pulled it's operations out of the area, she remained in Guatemala with Zafiro to continue protecting "The Green", while Turquesa and Jade went to Avalon to plant some of the flowers and herbs in their charge there. ("The Green")

In 2006, Obsidiana will come to the United States of America. How or why is currently unknown. [7]

Assuming she is still alive, Obsidiana is expected to lay her third egg in 2008. [8] Obsidiana and Zafiro will be the biological ancestors of Zafiro. [9]

Obsidiana, like many Mayan gargoyles has a large crest on her forehead. Her skin coloration is blue and her hair is black. She also has pterodactyl-type wings similar to Brooklyn's. Her ear structure is unique among gargoyles seen so far in the series.

Obsidiana sensed smugglers moving a powerful totem (the shaft of the Spear of Destiny) through the rain forest of ChacIxChel, and she and Zafiro followed the smugglers to New York. There, they catch up with the smugglers only to get distracted by Spider-Man, who attacks them (thinking the gargoyles are genetic mutants). Later, after reuniting with the Manhattan Clan, they learned of Demona's plans at an OsCorp vault. They arrive just in time to see Demona take the Crown of Thorns. Thanks to her pendant (made from human sorcery), Obsidiana entered Demona's thrall. After Demona lost the Spear and Crown, Goliath helped Obsidiana to her feet.