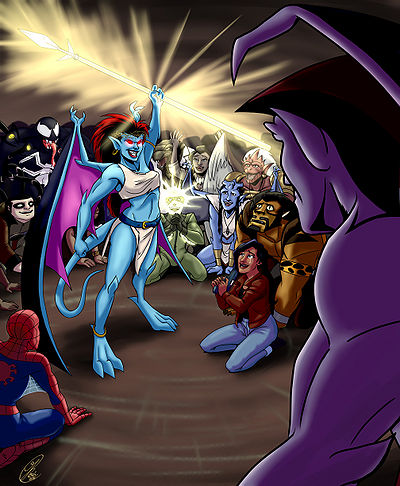 A depiction of the Radio Play's climatic scene as illustrated by Karine Charlebois. Keep in mind that this was commissioned fanart, and Elisa does not appear in this scene -- although her depiction here is exactly what Demona intended to do to her in the script.

"Religious Studies 101: A Handful of Thorns" was a Radio Play produced for the thirteenth and final Gathering of the Gargoyles in Los Angeles, California. It was performed on August 22nd, 2009.

This story took place after "Phoenix" and "Final Curtain". It is a non-canonical crossover between Gargoyles and The Spectacular Spider-Man. Two sequels, "Recruits" and "The Cosmos" were performed at CONvergence, 2014 and CONvergence, 2016.

Greg Weisman serialized the script at Ask Greg, from September 9 to September 14, 2009.

Demona, in her Dominique Destine guise, approaches Dr. Ashley Kafka, Director of the Ravencroft Institute, for permission to excavate below the Institute's foundations. She chooses for the excavation team Dominic Dracon (an inmate there since the events of "The Silver Falcon", still broken over the shock of discovering how futile his long quest for Mace Malone's stolen gems had been), alongside four former adversaries of Spider-Man (Otto Octavius aka Doctor Octopus, Maxwell Dillon aka Electro, Eddie Brock - once Venom, and John Jameson - once Colonel Jupiter) and Cletus Kasady.

Demona has learned that Vertros Ravencroft, founder of the Institute, had collected many strange objects and buried them beneath the Institute's foundations; among these is the head of the Spear of Destiny. After her diggers uncover it, Electro blasts his way out of the Institute to freedom, taking Octavius with them and escaping with the aid of the Vulture. The sun sets, Demona shifts back into her gargoyle form, and forces her own way out with the remaining inmates, promising them the power that they desire in return for their services.

Word of the break-out quickly spreads, reaching both the police and the Daily Bugle. Joe Robertson phones up Peter Parker to alert him, while he's web-slinging around New York as Spider-Man; almost immediately after receiving the phone call, Spidey sees Zafiro and Obsidiana fighting two men in a van, jumps to the conclusion that they're monsters, and goes to the aid of the men in the van (unaware that they're smugglers working for Demona). His interference allows the smugglers to get away, delivering their goods - the spear-shaft of the Spear of Destiny - to Demona. Demona joins the spear-head and spear-shaft together, re-activating the Spear's powers, and using them to transform John Jameson back into Colonel Jupiter and Eddie Brock back into Venom, as well as turning Cletus into Carnage. But she wants more power than just the Spear; she also wants "the Kingdom and the Glory".

Elsewhere in New York, the Green Goblin, newly returned, attacks Tombstone, but Goliath intervenes. Spider-Man, close by, hears the sound of the battle, goes to investigate, and mistakenly believes that Goliath is one of the Green Goblin's creatures. The fight between them comes to a premature end when the sun rises and Goliath turns to stone. When Spider-Man turns his attention to the Goblin, the Goblin throws one of his pumpkin bombs at the stone Goliath, escaping while Spidey webs the bomb away.

Demona approaches Tombstone in her Dominique Destine alias, offering him the services of her new henchmen, and Dominic Dracon as a front man for his operations, in return for the Tinkerer's services; she wants him to provide her with Mysterio's Homunculi.

That night, Goliath's clan learn from Zafiro and Obsidiana about Demona's smuggling activities, and from Elisa about Demona's break-out at Ravencroft. Matt alerts Elisa that the OsCorp vault is about to be attacked - not only are Demona and her followers preparing to assault it, but so are many of Spidey's other old adversaries (the Green Goblin, Kraven the Hunter, Dr. Octopus, Electro, and the Vulture among them). The gargoyles glide off to help the police in the coming battle. Spider-Man also learns of the fight and goes off to help deal with the super-villains.

As a complicated battle rages at OsCorp, Demona sends the Homunculi to retrieve the treasure she seeks: the Crown of Thorns. When she dons it, combining it with the Spear of Destiny and reciting a dark parody of the Lord's Prayer, she unleashes the two artifacts' combined power: control of all humans within the area of their effect, which is gradually expanding. The humans within range - including Spider-Man, Doctor Octopus, and Electro - kneel to her, as do even Zafiro and Obsidiana, because their pendants were made by a human wizard.

But Goliath is unaffected, and struggles to seize the artifacts from her, especially after Demona gloats over how she will use this power to make Elisa commit suicide, once the magic reaches and overcomes her. The battle between them weakens Demona's hold on the Crown and the Spear (aided by her having a touch of humanity in her, thanks to Puck's spell), enough for Spider-Man to recover and web the Crown away. Both the Crown and the Spear disappear in a flash of light; Goliath and Spidey believe that they have been destroyed. The humans nearby recover from Demona's spell, and both the gargoyles and Spidey leave, after Spidey webs up Demona, Doctor Octopus, and Electro.

The Spear and the Crown were not destroyed, however; Shari and Thailog, on the Illuminati's behalf, had Brentwood gain control enough of one of the Homunculi to have it steal both artifacts in the magical explosion, which will be delivered to Duval. Goliath and Spider-Man have become allies, while Dominique Destine is now a patient at Ravencroft - at least until the sun sets....

"A Handful of Thorns" is filled with in-joke references to both Gargoyles and The Spectacular Spider-Man, as well as several examples of meta-humor. Among these:

The Spear of Destiny

The story of the Spear of Longinus begins with an account in the Gospel of John of how one of the Roman soldiers on duty at the Crucifixion pierced Jesus's body with a spear after his death "and forthwith came there out blood and water" (John 19: 34). The Bible says nothing more about the spear, but later legend fleshed out this story. It named the Roman soldier "Longinus", and many stories spread of the fate of his spear, which became a holy relic. One claims that it was discovered at Antioch during the First Crusade in 1098. thanks to the visions of a young man named Peter Bartholomew (though later on the Crusaders suspected Peter to be a fraud; he died shortly after attempting to prove his honesty through an ordeal by fire), but other purported Holy Lances have appeared elsewhere. Chief among these is a spear-head kept in the Hofburg Museum in Vienna, once an heirloom of the Hapsburgs. Adolf Hitler is said to have believed it to be a valuable talisman, and claimed it for his own after his rise to power; he lost it, however, in the final days of World War II, shortly before his suicide in 1945, when the U. S. Army under General Patton seized it. Trevor Ravencroft's book The Spear of Destiny popularized the Hapsburg spear-head's claim to fame, though with questionable accuracy. (The Radio Play's script accepts the Spear's links to Hitler - and the Ravencroft family.)

In the medieval romances about the Holy Grail, the Spear of Longinus is kept at Castle Carbonek alongside the Grail, and borne with it in the Grail processions. The spear is also generally portrayed as delivering a terrible wound to the Fisher King that cannot be cured until the achievement of the Grail Quest, in an act commonly known as the Dolorous Blow. (The most familiar version of this story, in Sir Thomas Malory's Le Morte d'Arthur, ascribes this act to Sir Balin, who struck King Pelles in the leg with the spear, crippling Pelles and laying the lands around Carbonek waste.) The Spear's association with the Grail makes it appropriate that, at the end of the Radio Play, it should be delivered into the keeping of the Illuminati, with their links to the Holy Grail and Carbonek.

The Crown of Thorns

The Crown of Thorns is mentioned in the Bible as part of the mockery inflicted upon Jesus, just before the Crucifixion, by Pilate's soldiers; they dressed him up in the mock-regalia of a king, including a crown of thorns (and also a scarlet robe and a reed as a sceptre - though these have received far less publicity). This crown became one of the most familiar images relating to the Crucifixion thereafter.

Louis IX of France (1226-70), also known as Saint Louis, bought a relic said to be the Crown of Thorns in 1239, and ordered the Sainte-Chapelle in Paris built to house it. After the downfall of the French monarchy, Napoleon moved the Crown of Thorns to Notre Dame, where it remains to this day.