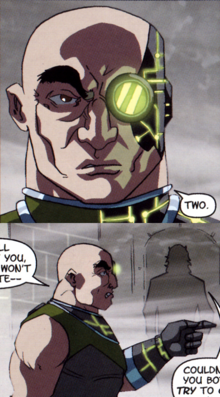 Duval is a high-ranking member of the Illuminati.

Duval is currently one of the two Number Twos in the Illuminati; the other is Quincy Hemings. ("Bash")

At the time that the Quarrymen were being formed, Duval personally called Xanatos by telephone at Castle Wyvern, although Xanatos showed little interest in answering his call. ("The Journey") His call was, apparently, to order Xanatos to accept an invitation to the White House on Halloween. ("Invitation Only")

Duval spends a lot of time at Castle Carbonek where he serves Peredur fab Ragnal and works with, but has a contentious relationship with Blanchefleur. He and Blanchefleur are the two people that Peredur loves most in this world. ("Rock of Ages")

Alongside concerning himself with the gargoyles, Duval will be clashing with King Arthur Pendragon during the latter's adventures; he is also a bitter adversary of the Director. [1][2][3]

Greg Weisman has indicated that there is a connection between Brother Valmont and Duval, though more information is unavailable. [4]

Duval appears as a bald, muscular human with cybernetic implants - specifically his left eye, and at least one of his hands. How he acquired these implants is, as yet, unknown.

Duval was first mentioned in 1996, in the first episode of The Goliath Chronicles, "The Journey", which was written by Greg Weisman. Between the show's cancellation and the production of the comic from Slave Labor Graphics, Greg revealed on the website Ask Greg that Duval was really Percival, one of eight survivors of the Arthurian legends, the husband of Lady Blanchefleur, and the founder of the Illuminati. He was described as follows:

Sir Percival. The Fisher King. Mr. Duval. Founder of the Illuminati. Spends a lot of time in Castle Carbonek, a sort of mini-traveling-Avalon, where time passes differently. Also uses the Holy Grail to maintain his youth, though at a very real physical cost, due to his, shall we say, sins. [5]

On the site, Greg Weisman also mentioned that the use of the suffix -val in Duval's name was specifically intended to reference this connection. [6]

Duval first appeared in "Rock of Ages", published in Gargoyles: Clan-Building, Volume Two, alongside the new character Peredur fab Ragnal, who appears to be the head of the Illuminati. Peredur is a Welsh equivalent of Percival, but Greg has said that nothing has changed from his original plans. [7]

While writing for the comic book, Greg Weisman mentally casts new characters so he can hear a voice. For Duval, his actor of choice is Eddie Marsan. [8]