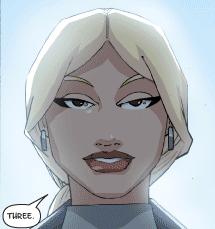 Fleur (originally Blanchefleur) is Peredur fab Ragnal's wife and the Grail Queen at Castle Carbonek, where she still resides. She is also a member of the Illuminati.

Fleur married Peredur after his quest for the Holy Grail. [1] Fleur's use of the Holy Grail has given her immortality, but with the price of being estranged from her husband. [2][3]

Fleur met David Xanatos in a warehouse after his supposed theft of the Stone of Destiny. She brought the "stone" back to Carbonek and presented it to Duval and Peredur. She was later seen eavesdropping as Peredur was informed by the Spirit of Destiny that Arthur Pendragon had awakened and returned from Avalon.

She also seems to have a contentious relationship with Duval. ("Rock of Ages")

She will accompany King Arthur and Sir Griff on their adventures. [4]

Blanchefleur first appears as Percival's love in Chretien de Troyes' 12th century poem, Perceval. Here she is a young noblewoman whose estate is besieged by one Sir Clamadeus, who lusts after her and her estate; Percival champions her, overthrowing Clamadeus in battle, and wins her heart. The two of them are afterwards separated when Percival continues on his adventures, and do not meet for the remainder of the (admittedly unfinished) poem.

Later medieval versions of Percival's story omitted Blanchefleur in order to keep Percival a virgin (an important requirement for achieving the Holy Grail in their eyes), but Roger Lancelyn Green reinserted her in his King Arthur and his Knights of the Round Table, tying her in more closely into Percival's role as a Grail Knight. Here, Percival comes upon her sleeping in a pavilion on his way to King Arthur's court for the first time, falls in love with her, and exchanges rings with her (a part of the original Percival story in Chretien, although in Chretien's poem the lady in the pavilion is a different character than Blanchefleur); later on they meet briefly at Carbonek, where Percival learns that she has returned his love. However, when the Grail Procession takes place in the hall where they stand, Percival becomes so excited by it that he rides out of the castle vowing to go on the Quest of the Holy Grail, realizing only too late that he cannot find his way back to Carbonek or Blanchefleur afterwards. At the end of the quest, however, he and Blanchefleur are reunited at Carbonek, where she now serves as the Grail Maiden; they are wedded there (Sir Galahad himself officiating at the ceremony), and rule over Carbonek together happily.

Fleur is the Gargoyles version of the Arthurian character Blanchefleur, wife of Percival, both of whom Greg had revealed in 2000 were still alive in the Gargoyles Universe. [5]

While writing for the comic book, Greg Weisman mentally casts new characters so he can hear a voice. For Fleur, his actor of choice is Rhona Mitra. [8]