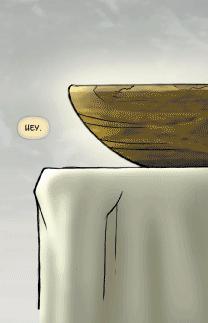 The Holy Grail is a legendary vessel, said to have been the cup that Jesus Christ drank from at the Last Supper.

After the Last Supper, Joseph of Arimathea brought the Holy Grail to Britain, where it eventually passed into the keeping of the Fisher Kings at Castle Carbonek, including Pelles. [1]

During King Arthur Pendragon's reign, it was the object of a great quest for the knights of the Round Table, and finally achieved by Percival. Peredur fab Ragnal currently serves as its guardian as Fisher King at Castle Carbonek. The Grail has granted both him and his wife Blanchefleur immortality, although at some cost to Peredur because of the various unscrupulous deeds that he has committed as the head of the Illuminati. King Arthur and Griff will go in quest of it after they find Merlin, eventually pitting them against the Illuminati. [2]

The Grail looks like a plain wooden bowl. It evidently has some form of sapience, since it and the Stone of Destiny exchanged greetings at Carbonek. ("Rock of Ages")

It is possible that Goliath and Elisa will at some point become involved in this quest as well, particularly in light of the fact that when an amnesiac Elisa told Goliath on Easter Island that his account of her adventures with him contained everything except for King Arthur and the Holy Grail, he replied, "Well, we haven't encountered the Holy Grail yet." Macbeth might also become "a bit" involved with this quest. ("Sentinel") [3][4]

Although the Holy Grail is probably magical, its magic is neither that of mortals nor of the Third Race.

The Holy Grail first appears in the 12th century poem "Perceval" by the French Arthurian romancer Chretien de Troyes. Here it is portrayed as a mysterious vessel in the Fisher King's castle, which provided sustenance to his court; it is not yet called the "Holy Grail," however, or linked to Christianity. Later romancers, however, added onto its story, tying it in with Jesus Christ and expanding on its role, until by Sir Thomas Malory's time it had become a major part of the Arthurian legend. Originally, Percival was the hero of the Grail legends, but although he remained in them through later retellings, he was eventually made subordinate to Galahad, who was specially created for the Grail legend by the authors of the Vulgate Cycle in 13th century France.

Different writers of Arthurian legend have portrayed the Holy Grail as different objects: it is usually described as a chalice, bowl, dish, or plate, but it has also been depicted as a meteorite, and in one unusual retelling, the Grail's place in the story was occupied by a severed head on a platter. In several stories it is accompanied by a holy spear that continually drips blood (itself sometimes identified with the lance of Longinus, which pierced Christ's side at the Crucifixion - and which featured in the Radio Play at the 2009 Gathering, though the Radio Play was not canon, and the Holy Lance's links to the Arthurian cycle were not included).

According to the most familiar version of the legend, the Holy Grail was the cup from which Jesus Christ drank at the Last Supper, and which was later on used to catch his blood during the Crucifixion. Joseph of Arimathea brought it with him to Britain, and it eventually passed from his hands to a succession of Fisher Kings who lived at the castle of Carbonek, all the way down to King Arthur's reign.

Conventional Arthurian art depicts the Holy Grail as an ornate golden chalice, but many have argued that the Grail would have been far plainer (for one thing, it is unlikely that Jesus, in light of his lack of interest in material wealth, would have drunk out of anything so fancy). The movie Indiana Jones and the Last Crusade, for example, made use of this notion at the climax. Gargoyles has clearly also embraced this interpretation, in the Grail's introduction scene in "Rock of Ages".

The Grail had many miraculous properties: it could bestow whatever food and drink a person most liked, heal mortal wounds, and cure insanity. But as something strongly connected to God, it could only be achieved by the pure of heart; the impure could no more behold it than a blind man could see a bright sword. Even the Fisher Kings had to live by exacting moral standards in order to be fit to serve as its guardians, and when they strayed, terrible consequences generally befell them. It could only be borne by a pure maiden (generally one from the Fisher King's family), and was kept covered with a cloth of white samite.

According to Malory, the Holy Grail appeared briefly at Arthur's court while the knights of the Round Table were assembled there for Pentecost. The knights were suitably awed by its wonder, and all vowed to quest after it that they might fully behold it and drink from it, thus receiving spiritual enlightenment.

However, only three of the knights, Galahad, Percival, and Bors, were able to achieve it at Carbonek. The other knights failed to achieve the Grail because of their sins, particularly Lancelot on account of his adultery with Queen Guinevere. (Roger Lancelyn Green in his Arthurian retelling - one of Greg Weisman's leading primary sources for the Arthurian legend - gave Gawain a "qualified success"; he visits Carbonek and asks a question that heals the Wasteland that lies about it, for which he is honored, although not able to drink from the Grail himself.)

After Galahad, Percival, and Bors achieved the Grail, Galahad, the purest of the three, died and his soul was immediately taken up to Heaven. Bors returned to Camelot to tell the story to King Arthur and his court. The fate of Percival and the Grail varies from account to account, however. Malory has the Grail taken up to Heaven forever, never to be seen again, and Percival quietly retire to a hermitage and die a year later. Other versions of the story, particularly the older ones, have the Grail remain on Earth, still kept at Carbonek, with Percival now as its guardian. Gargoyles clearly follows the latter version.