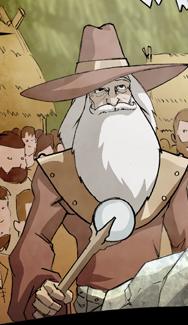 Merlin was King Arthur's tutor and advisor, and one of the greatest and most famous wizards of all time.

Merlin was begotten by Oberon upon a human woman (a Welsh noblewoman) in 5th century Britain, and grew up to become a powerful wizard. [1] He took the young Arthur Pendragon under his wing and educated him, preparing him for his role as the man who would build Camelot and become one of Britain's greatest rulers ever.

According to the legend as told by Shari, in the year 500, Merlin and King Pelles of Castle Carbonek met with the Irish prince Fergus and persuaded him to loan them the Stone of Destiny, so that they could use it to set up the Sword in the Stone for Arthur. After it had fulfilled its purpose, Merlin and Pelles brought the Stone to the island of Iona. ("Rock & Roll")

Merlin and Oberon have difficult relations, although the details are not as yet known. [2] Nevertheless, Merlin has done Oberon an important service at some point in the past, which Oberon repaid by granting King Arthur a haven in Avalon following his last battle. [3] Merlin is currently imprisoned in his Crystal Cave, although its whereabouts are unknown. [4] He became trapped there by Nimue at some point during or possibly shortly after Arthur's reign. [5][6] 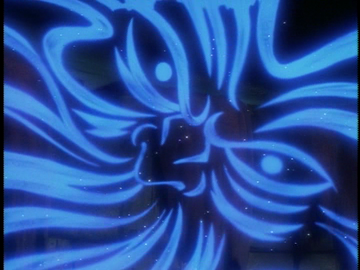 A magical image of Merlin

During his time of freedom, Merlin created the Scrolls of Merlin, which record much of his life, including his tutoring of the young Arthur. He stored them in a Welsh cave, along with various other belongings of his, such as a lyre. ("A Lighthouse in the Sea of Time") [7][8] He may have also contributed spells to the Grimorum Arcanorum. [9]

At present, Merlin is the object of a quest that King Arthur and Griff have embarked upon. ("Pendragon", "Rock & Roll") Arthur, Griff, and (possibly) Blanchefleur will eventually find him and free him from the Crystal Cave, after which he will rejoin Arthur. [10][11]

As a halfling, Merlin can use both human and Avalonian magic, but never at the same time or on the same thing. [12] He is very powerful as far as mortals go, but not by the standards of Oberon's Children. [13]

Merlin seems to be remotely based on a figure variously known as Myrddin or Lailoken, who served as court bard to King Gwenddolau, a ruler of a tribe of northern Britons in the late 6th century A.D. When Gwenddolau was slain at the Battle of Arderydd in 573, Myrddin went mad and fled into the Caledonian Forest nearby, making many utterances which were interpreted as prophecies. Myrddin's reputation as a wizard and prophet grew over the centuries, until Geoffrey of Monmouth finally gave him his Arthurian role in his History of the Kings of Britain in 1136, combining him with the boy prophet Ambrosius in Nennius' History of the Britons to produce the figure of Merlin Ambrosius with whom we are familiar. (Geoffrey renamed "Myrddin" "Merlin" to distance his name from the French word merde, meaning - well, something generally not brought up in polite society.)

The legend of Merlin, as established by Geoffrey and his successors in the High Middle Ages, all the way down to Sir Thomas Malory, goes as follows: He was the son of a Welsh princess in Dyfed (southwestern Wales) by an incubus or demon - some late versions of the legend make Merlin's father the Devil himself, who begat him to create an Antichrist or false prophet to delude humanity, but was foiled because of the virtue of Merlin's mother. As a result, Merlin possessed the powers of a demon, but not the moral nature of one, and used his gifts for the cause of good.

When Merlin was still a boy, the British king Vortigern was building a castle in the mountains of northern Wales, whose walls kept on falling down each night. Vortigern's soothsayers and advisors told him that he must find a boy who had no human father, kill him, and mix his blood with the mortar for the foundations. This boy, of course, was Merlin, but he calmly revealed to Vortigern that the real reason why his castle refused to stand was because of an underground pool beneath the foundations. When the pool was drained, two dragons were found at the bottom of it, one red and one white. They awoke and fought each other. Merlin announced that the dragons and their battle were symbolic of the struggle between the Britons and the Saxons, the red dragon standing for the Britons and the white dragon the Saxons; he also foretold the coming of Arthur.

After Vortigern's death, Merlin entered the service of his successors, Aurelius Ambrosius and his brother Uther Pendragon. Merlin helped bring about the birth of Arthur through arranging the union of Uther and Igraine at Tintagel, and afterwards took the infant Arthur away for fostering by Sir Ector. When Arthur grew up and became King of Britain by pulling the Sword from the Stone, Merlin served as his advisor throughout, helping him defeat his enemies and leading him to the Lady of the Lake, who gave him Excalibur. He also reluctantly helped Arthur marry Guinevere, although he did his best to urge Arthur against this because he foresaw her love affair with Lancelot that would help destroy Camelot.

Not long after Arthur and Guinevere's wedding, Merlin fell in love with Nimue and left Arthur's court to woo her. Disliking his attentions, Nimue persuaded him to teach her his magic and then used the spells that she had learned from him to imprison him in order to be rid of him, some say in a cave in Cornwall, others in an invisible tower in the forest of Broceliande in Brittany. Merlin remains there, so the story goes, to this very day.