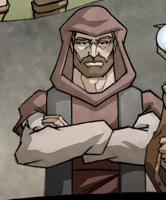 Pelles was the priest-king of Castle Carbonek during the early reign of King Arthur Pendragon.

According to legend as told by Shari, around the year 500, Pelles and Merlin met with the Irish prince Fergus, who had been brought to Carbonek on his way to Scotland, and persuaded him to loan them the Stone of Destiny. They then brought the Stone to London to use for the young Arthur's Sword in the Stone feat; Pelles was present at the occasion, and crowned Arthur High King of Britain on September 29, 500. Afterwards, he and Merlin returned the Stone to Fergus and his people, depositing it on the island of Iona. ("Rock & Roll")

Pelles (also known as Pellam) appears in Sir Thomas Malory's Le Morte d'Arthur and its sources as the guardian of the Holy Grail at Carbonek. The stories about him often contradict each other (in particular, it is uncertain whether he is the same as the Maimed King found at Carbonek or not); however, this is the story as told by Roger Lancelyn Green (one of Greg Weisman's chief Arthurian sources).

King Pelles had in his service a knight named Sir Garlon (his brother in Malory) who had the gift of becoming invisible, and used it to murder people treacherously. One of Arthur's knights, Sir Balin, vowed to put an end to Garlon's villainy, followed him to Carbonek, and there slew him. Pelles, however, enraged by Balin's act (and either unaware of Garlon's evil, or else of the opinion that Balin's breach of hospitality demanded punishment), attacked him, breaking his sword in half; Balin fled the great hall, searching for another weapon, and came to the chamber where the Grail and the Spear of Longinus were being kept. He snatched up the spear and ran Pelles through the leg with it; this was the Dolorous Blow, which laid the lands around Carbonek waste and gave Pelles a wound that refused to heal, rendering him helpless.

Many years later, Sir Lancelot came to Carbonek, where Pelles' daughter, Elaine, fell in love with him. Aware that Lancelot and Elaine were the destined parents of Sir Galahad, who would someday heal him of his wound, Pelles tricked Lancelot into mistaking Elaine for Guinevere and sleeping with her. Thus, Galahad was born, and many years later, when he had grown up, he came to Carbonek with Sir Percival and Sir Bors on the Quest of the Holy Grail. Galahad then healed Pelles of his wound; the old king died soon afterwards.