The correct title of this article is Rock & Roll. The ampersand has been replaced because of technical restrictions. 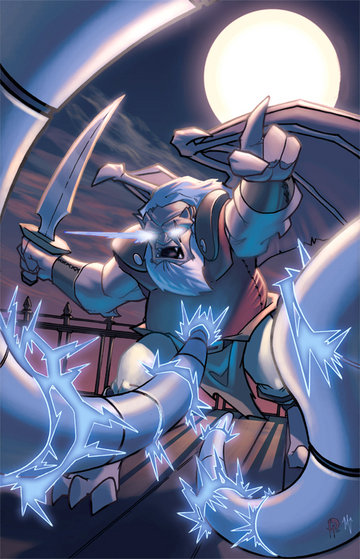 "Rock & Roll" is the eighth issue of the Gargoyles comic by SLG, and Chapter Eight of the Clan-Building story arc. It was released on March 26, 2008. The issue was reprinted in Gargoyles: Clan-Building, Volume Two. It was adapted into a Radio Play and performed at the Gathering of the Gargoyles in 2008.

From the Holy Land to the British Isles... everyone wants a piece of the Rock. Xanatos, Macbeth, Coldsteel, Thailog, Merlin, Cu Chullain and the gargoyles strive to find it, possess it and learn its darkest secrets. All this and Fox's new shoes in CLAN-BUILDING, Chapter 8: Rock & Roll.

The story continues from the last issue, "The Rock". In London, Macbeth and King Arthur realize that they share the same mission of protecting the Stone of Destiny. Hudson and Lexington meet up with Griff, Staghart, and Constance of the London Clan, who bring the two Manhattan Clan members to their clan's home at Knight's Spur, while Arthur and Macbeth stand vigil through the day. They all go out later that night to stand watch at the Abbey, and are attacked by Coyote 5.0, Coldsteel, and a Steel Clan and Iron Clan robot. Macbeth and Arthur watch the scene from the ground when Arthur mysteriously disappears. The two gargoyle robots are disposed of, but Coyote takes out Lexington, who is saved by Staghart, and Coldsteel nearly dismembers Hudson when Coldstone and Coldfire show up.

Vinnie is boarding his flight for Japan.

A man calls for a bomb unit on a bridge.

Shari continues telling Thailog about the Stone of Destiny, while the two play chess. Shari's stories contradict each other as she begins the tale with Moses taking the stone along with him during the Exodus, and bringing forth water from it for his thirsty followers. The stone is passed down through the centuries until King Eochaid of Ireland accepted it as dowry when he married Princess Tamar Tea Tephi, and brought it to Tara. The stone was later cut in half by Cu Chullain, angry that it didn't confirm his friend Lugaid Red-Stripe as King. Prince Fergus of Ireland brought a stone half to Scotland, where Merlin and King Pelles contact him at Castle Carbonek, borrowing the stone so that Arthur could pull Excalibur from it. Saint Columba died upon the stone on Iona, and Kenneth mac Alpin was crowned King upon the stone at Scone, as were all the Kings of Scotland thereafter.

Arthur and Macbeth trade stories about their pasts over Nightstone's Coffee. They make a toast to immortals.

Arthur explains that he and Griff have searched fruitlessly for Merlin, so they returned to London where Arthur has been researching his own exploits.

Lexington talks to Staghart and Constance about the London Clan, which is revealed to have 196 members, 25 eggs, but no gargoyle beasts. Mated pairs in the clan are only allowed two eggs a lifetime to keep the population under control.

"The Rock" ended with Macbeth, Hudson, and Lexington seemingly threatened by King Arthur and a few London gargoyles. Fortunately, Arthur quickly learns that Macbeth shares his concern over the Stone of Destiny's safety, and since Griff is one of the London gargoyles on the scene, Hudson and Lexington are soon making friends with the new gargoyles. These are Constance (nicknamed "Coco") and Staghart (nicknamed "Amp" - though only Lexington calls him that). Both are lively young gargoyles; Coco, in particular, is a fine warrior, able to disarm (literally) a Steel Clan robot in aerial combat (outdoing Beowulf in his battle against Grendel by pulling both arms off). Staghart and Lexington have quickly developed into close friends.

We learn more about the London Clan as well, and that the Into the Mystic shop is not their only property. The bulk of them live in the country estate of Knight's Spur. And they are a numerous clan - so numerous that they have to set up breeding strictures to prevent overpopulation. They also have no gargoyle beasts (the way that Griff reveals this almost suggests there is a story there).

Arthur, in the meantime, is clearly developing from an enemy to Macbeth (as in "Avalon" Part Three and "Pendragon") into a friend and ally. The two of them share their thoughts over coffee on being immortal medieval kings in the modern world, and stand vigil over the Stone of Destiny together - until Arthur mysteriously disappears. We also learn that Arthur, unable to find Merlin, has taken to studying the legends about himself and his famous advisor, in order to gain guidance.

Speaking of legends, Shari is still narrating the backstory of the Stone of Destiny to Thailog - who points out some of the inconsistencies in her account. (Shari has provided a second version of the Stone's history in biblical times; now she claims that Moses took it with him during the Exodus rather than entrusting it to Gathelus and Scota, that it was the stone he struck to provide the Israelites with water, and that it was brought to Ireland by the prophet Jeremiah some centuries later.) Shari, however, is not at all fazed by Thailog's response, and he has to back down in the end. Shari also tells how Cu Chullain split the Stone in half during a rage, how Prince Fergus took it with him to Ireland, and how the Stone became part of the young Arthur's Sword in the Stone feat. (We even see Merlin clearly for the first time in the comic - though in flashback form - and that he's wearing a cowboy hat. Merlin is also portrayed as partners with King Pelles of Castle Carbonek, entering the Gargoyles Universe for the first time.) Shari also reveals the Stone's links to Saint Columba (already connected to the Gargoyles Universe through his taming the Loch Ness Monster) and Kenneth mac Alpin, the founder of Scotland.

Back in London, the gargoyles find themselves attacked by Xanatos's forces: not only Coldsteel and Coyote 5.0, but also two Steel Clan robots - or rather, a Steel Clan robot and an Iron Clan robot (apparently left over from "The Gathering" Part Two). (Evidently Xanatos is not worried about the gargoyles discovering that he's behind the threat to the Stone of Destiny.) While Griff and Coco take out the Steel Clan robots, Lexington is injured by Coyote, and Hudson almost maimed by Coldsteel - but fortunately, Coldsteel's designs on the oldest member of the clan are foiled by the arrival of Coldstone and Coldfire on the final page....

We still have many questions yet to answer. Why has Arthur disappeared? Why are the Illuminati and Xanatos interested in the Stone of Destiny (assuming that it's their real goal)? What is the significance of Xanatos pushing a red button on November 12? And what does Fox buying shoes have to do with all this? "Rock of Ages", the next issue, should (we hope) provide solutions for all (or almost all) of these mysteries.

"Nobody calls you Amp, luv!" - Staghart and Constance

Most of Shari's account of the Stone of Destiny's history is based on actual legends about it (including its links to Jeremiah and Tea, Cu Chullain striking it in half, Fergus bringing it to Dalriada, Columba dying beside it, and Kenneth mac Alpin and his successors being crowned upon it). Its identification as the Stone from the Sword in the Stone is entirely new (though it goes back all the way to "Pendragon"); we finally have the details for how that came about.

The apparent inconsistency in Shari's story of how the Stone of Destiny came to Ireland (one version having Moses give it to Gathelus and Scota, the other having Moses keep it during the Exodus and Jeremiah and Tamar bring it to Ireland), which Thailog calls her on, foreshadows the revelation of the Stone's true nature in "Rock of Ages".

The date of Arthur's mortal wound and conveyance to Avalon, 542, comes from Geoffrey of Monmouth's History of the Kings of Britain.

Macbeth and Arthur's coffee cups are labeled "Nightstone's"; apparently either Demona or Thailog has decided to go into the coffee business. Their labels are written in the Gargoyles font.

Constance and Staghart's nicknames are references to the original comedy development of Gargoyles. Coco was at first the name for a heavy-set female gargoyle, the forebearer of Broadway; Amp was the name of Brooklyn's comedy counterpart (though he physically resembled Lexington more than Brooklyn). Later on, Hudson completes the references to the comedy development's trio when he addresses the other gargoyles as "lads and lassie"; Lassie was the name of the comedy precursor of Lexington.

One of the books that Arthur is consulting is Sir Thomas Malory's Le Morte d'Arthur, the famous 15th century English prose romance that has become the leading primary source for the Arthurian legend in modern times.

Arthur repeats Seline's famous line from "Avalon Part Two" (which Greg Weisman has quoted several times at Ask Greg), "All things are true", but adds to it "Few things are accurate". In 2010, he commented that the amended line is one of his personal favorite lines he's ever written. [1]

Lunette, one of the youngest members of the London Clan, is named after the Lunette of Chretien de Troyes' Arthurian verse romance Yvain, the Knight of the Lion. [2]

Lexington's cry to Coyote, "Dream on, you electric sheep!" is an allusion to Philip K. Dick's Do Androids Dream of Electric Sheep?

Thailog and Shari repeat (with some minor changes) Xanatos and Owen's exchange at the start of "The Edge", when Shari asks Thailog if he would prefer she deliberately lost to him at chess.

When asked if they are mated to each other, Constance and Staghart deny it vigorously, but with a lighthearted tone of being very close friends.