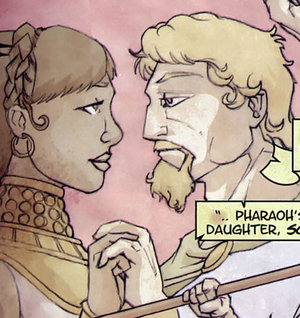 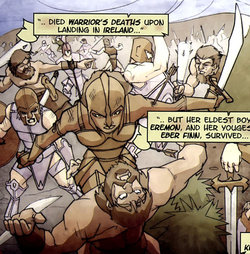 Scota was a legendary daughter of the Pharaoh of Egypt at the time of the Exodus.

According to a story told by Shari in 1996, Scota was given in marriage to the Athenian prince Gathelus, as a reward for his services to her father. Moses, who had befriended the couple, warned Gathelus and Scota of the Ten Plagues due to descend upon Egypt; they promptly fled overseas, taking with them the Stone of Destiny (which Moses had entrusted to them). At Samothrace, Scota gave birth to twin sons (the elder of whom was named Eremon). She and her husband continued on to Portugal, by which time Scota had given birth to another pair of twin boys. By the time of her husband's death, she had eight sons; however, after she left Portugal, five of her sons were drowned at sea, and she herself (along with a sixth son) was slain in battle when they reached Ireland. Only two of her sons survived; Eremon, the oldest son, and Eber Finn, the youngest. ("The Rock")

Scota was an actual legendary figure, an eponymous ancestor of both the Irish and the Scots.