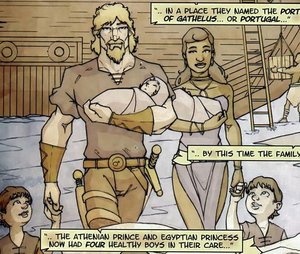 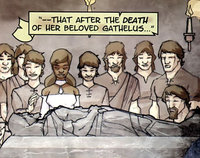 Gathelus was a legendary Prince of Athens who brought the Stone of Destiny out of Egypt.

According to a story told by Shari, Gathelus was the son of the King of Athens. He was a capable warrior and won many victories fighting for the Pharaoh of Egypt. The Pharaoh rewarded the Athenian Prince with the hand of his daughter, Scota, in marriage. Not long after they were wed, Scota became pregnant. During her pregnancy, Gathelus and Scota were warned by Moses, who they had befriended, that plagues would soon befall Egypt and they decided to flee. Moses put in their care Jacob's Pillow.

Not long after, their ship landed on the shores of Samothrace, where Scota gave birth to twin boys (the elder of which was Eremon). The family continued to wander the globe for two years with the Hebrews' Sacred Stone in their possession before arriving on a land they named the Port of Gathelus (Portugal). By this time they had four sons and they would go on to have four more sons (the youngest being Eber Finn).

When Gathelus died, he was placed in a stone sarcophagus and mourned by his wife and sons, who shortly thereafter left Portugal with the Stone.

Gathelus, also known as Goídel Glas, is a legendary figure, known as the ancestor of the Gaels.

In Raphael Holinshed's Historie of Scotland, Gathelus' father was Cecrops, the legendary founder of Athens. [1]

A variant of the legend of Gathelus claims that he and Scota were driven out of Egypt after Pharaoh was drowned in the Red Sea while pursuing Moses and the Israelites; the Egyptian nobles feared that Gathelus would take advantage of his father-in-law's sudden death to seize the throne.

The Gathelus of Gargoyles may also be based on Milesius, the mythical ancestor of the Milesians (the first humans to settle permanently in Ireland, according to legend). Milesius once lived in Spain, but after learning that his nephew, Ith, had been slain in Ireland by the Tuatha Danaan (the Irish faerie-folk), vowed to invade Ireland to avenge his kinsman. He died before he could reach it, however, so his wife Scota and their sons led the Milesians to Ireland in his stead.