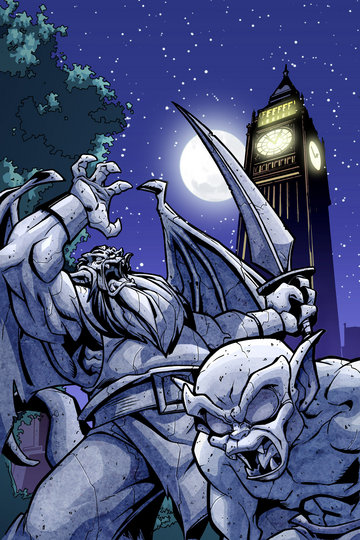 "The Rock" is the seventh issue of the Gargoyles comic by SLG, and Chapter Seven of the Clan-Building story arc. It was released on December 12, 2007. The issue was reprinted in Gargoyles: Clan-Building, Volume Two. It was adapted into a Radio Play and performed at the Gathering of the Gargoyles in 2008.

What's a gargoyle to do when Xanatos is on the job for the Illuminati; Coldsteel's in town; Thailog's breaking in new assistants, and Macbeth needs a favor? Well, what else can you do except... ROAD TRIP!!!! As Goliath and Elisa attempt to repair their relationship, the rest of the clan contemplates a change of scene. But how far should they go to save a slab of stone? And why is Fox buying new shoes? Find out in CLAN-BUILDING, Chapter 7: The Rock.

Macbeth goes to the Eyrie Building to ask the Manhattan Clan for their help in ensuring the Stone of Destiny's safe arrival to Scotland from Westminster Abbey in London, explaining that many desire the stone, including Xanatos. Goliath, still recovering from Thailog's attack, sends some of the others to help Macbeth. Brooklyn, Angela, and Broadway decide to stay behind, while Lexington and Hudson accompany Macbeth to London. The three of them stand vigil at Westminster Abbey on the night the stone is to be moved from the Lantern. Nothing happens for a long while, when Macbeth notices a mysterious shadow. He investigates only to be caught unawares by King Arthur Pendragon, while the gargoyles are suddenly joined by some new arrivals from the London Clan.

Xanatos proves that he is indeed up to something, while he explains to Coldsteel about the Coyote Diamond, which he's using as a component for his robot, Coyote 5.0. He promises Coldsteel that he will disable his built in tracking device if he agrees to do Xanatos a favor. Later the same day, Xanatos prepares to leave for England while Owen spies on Macbeth and the gargoyles. He tells Xanatos of their plan, to which Xanatos responds that he's planned for this contingency.

Fox is interested in a pair of shoes in a London shop.

Shari begins telling Thailog the history of the Stone of Destiny during different time intervals on different days. She starts off with Jacob's vision while laying his head upon the stone at Bethel. Next, she tells the story of Gathelus and Scota, who brought the stone with them out of Egypt at the request of Moses. They travelled the world before finally settling down in Portugal. Later, after the deaths of Gathelus, Scota, and six of their sons, the oldest son, Eremon, was crowned King upon the stone at Tara in Ireland.

Elisa brings Dr. Sato to the Labyrinth to check on Maggie, who is revealed to be pregnant.

Shari tells Thailog the story of the love triangle between Coldstone, Coldfire, and Coldsteel.

Goliath and Elisa talk about what happened on Halloween. Elisa indicates that she wants to pursue a relationship with Goliath, and they kiss.

"The Rock" has to be the most remarkable issue of Gargoyles to date; Greg Weisman arranges this story in a non-linear fashion, jumping about through the events during the first two weeks of November as seen by the various characters (and even as far back as 1040, at least). Fortunately, the events are all carefully located on the timeline by captions, allowing an attentive reader to discover in what order they are taking place.

The focus is on the Stone of Destiny, which had been introduced in "City of Stone" Part Three, played a larger role in "Pendragon", and now takes center stage. The Stone is about to be returned to Scotland after seven hundred years (a real event from November 1996), but Macbeth is afraid that someone will try to steal it. Therefore, he calls upon the gargoyles for assistance; Hudson and Lexington agree to help him, and accompany him to London while the rest of the clan remains behind in New York.

Macbeth is correct to be concerned about the Stone, for Xanatos is setting his own plans in motion, that include a partnership between Coldsteel and the latest Coyote robot, Coyote 5.0, now apparently powered or augmented by the Coyote Diamond from "Her Brother's Keeper". What his precise goals are yet is unknown, but it is not difficult to suspect that they involve the Stone - and the instructions that he received from the Illuminati in "Bash".

And as if that was not trouble enough, Macbeth, Hudson, and Lexington find themselves facing more unexpected opponents when King Arthur and three London gargoyles (Griff and two new gargoyles - one resembling a wild sow, the other a stag) appear on the scene, in a hostile mood...

While this is going on in London, Shari tells Thailog (and occasionally Brentwood) the story of the Stone of Destiny's past, all the way down to its arrival in Ireland. Presumably, in the succeeding issues (#8 and #9) she will continue to narrate its fortunes all the way to the present day. These scenes are colored in sepia, keeping them distinct from the rest of the story. (In a wonderful touch, at one point Shari is shown telling the story as Thailog carries her through the sky, in what can only be a twisted echo of Goliath and Elisa.)

But not everything in this issue involves the Stone. Dr. Sato is introduced to the Mutates, bringing him further into the gargoyles' circle of human friends and allies - and reveals that Maggie is pregnant. Goliath and Elisa fully accept the fact that they are meant to be together, in a moving scene with many echoes of their break-up in "Invitation Only" - though this time in a happier mood. Hudson and Lexington experience jet lag upon their arrival in London. And Fox (who has accompanied her husband to Britain) is buying a pair of shoes - though we shall have to wait for future issues to learn the significance of that...

This is a fine issue, as well as a challenging one, and I look forward to seeing the continuation of this story in "Rock & Roll".

The caption on the front cover, "Stone...at night?!" echoes Goliath's cry in "Awakening: Part Two" on finding the trio, Hudson, and Bronx turned to stone.

Shari's account of the Stone of Destiny's history - the stone that Jacob used for a pillow at Bethel, conveyed from the Middle East to Ireland by the Athenian prince Gathelus and his wife, the Egyptian princess Scota - is based on actual legend. (Variations of this tale have Gathelus and Scota driven into exile after Pharaoh was drowned while trying to cross the Red Sea and the surviving Egyptian nobles feared that Gathelus would attempt to seize his father-in-law's throne, or have Gathelus still alive when his family reached Ireland.)

On Page 2, Lexington is saying to an as yet undisclosed someone or something (in "Rock and Roll", his addressee is revealed to be Staghart), "I'll call you Amp". The name is an in-joke; in the original development of Gargoyles, when it was designed as a comedy, one of the gargoyles was named Amp. (He looked much like Lexington, appropriately, but in character was closer to Brooklyn.)

The flashback to Macbeth's coronation on Page 4 clashes with its depiction in "City of Stone Part Three": for example, in the television episode, Macbeth is crowned in the great hall of a castle, while in the comic book, he is crowned outdoors. According to Robby Bevard, the colorist for this issue, this was because the television episode had mishandled the coronation scene, and so Greg decided that he "might as well do the thing right this time", as Robby put it. Demona and Gruoch are both shown attending the coronation.

On the same page, Macbeth incorrectly states that the Stone is being returned to Scotland "after eight hundred years"; it should be "seven hundred years", since the Stone was seized by the English in 1296.

Macbeth alludes to Banquo and Fleance having deserted him for Castaway.

Macbeth is revealed as having a house in Berkeley Square, which contains one of the most infamous haunted houses in England (at No. 50). While Greg is aware of this, he chose this location for two different reasons: one was that it was the home of a close friend of his parents, the other was that he had been recently listening a lot to the song "A Nightingale Sang in Berkeley Square".

Greg Weisman also stated that: "I do feel I missed a bet on the Macbeth waiting page (Page 10). There should have been a panel right before the last panel on the page showing only the stone Lex and Hudson and no Macbeth. The copy would have read as follows: CAPTION 1: NOVEMBER 3, 6:44PM GMT. CAPTION 2: BATHROOM BREAK." [1]

It is also revealed that Macbeth took part in the real-life theft of the Stone of Destiny from Westminster Abbey on Christmas, 1950.

The story beginning in this issue and continuing in "Rock & Roll" and "Rock of Ages", involving the real-life return of the Stone of Destiny from Westminster Abbey to Scotland in late 1996, is a story idea that Greg Weisman revealed he intended to use even before the year 2000. [2] It was originally intended to appear in the Pendragon spin-off.

In the panel in which Xanatos encourages Fox to buy the shoes she likes, the Clock Tower of the Houses of Parliament (most famous for housing the bell known as Big Ben) is visible in the background. In a small nit, the caption for the panel says the time is 2:18 PM GMT, whereas the Clock Tower reads 5:30.

When Shari relates the story of the Coldtrio to Thailog, Hakon's hand and mace appear in the top right panel. This is an allusion to the Wyvern Massacre in which the three gargoyles lost their lives.