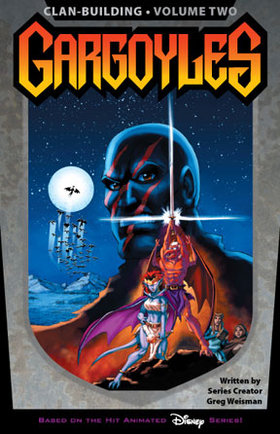 Gargoyles: Clan-Building, Volume Two is the second trade paperback of the Gargoyles comic by SLG, and collects the final chapters of the Clan-Building story arc. In June 2009, SLG released a trailer in anticipation of its summer release. The trade was released for purchase in August 2009. [1]

Gargoyles: Clan Building Volume Two collects issues 7-8 off the SLG/Disney Gargoyles series and combines it with the unpublished material scheduled for issues 9-12, including a chapter (issue 10) drawn by series character designer Greg Guler, making this a truly special book. This is a MUST for all fans of both the TV and comic book series.

The following comics were not published in single issue format, but included in the trade paperback as "bonus material".