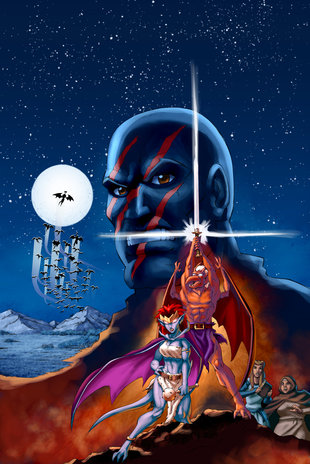 You may be looking for Phoenix (entity).

"Phoenix" is the twelfth issue of the Gargoyles comic by SLG, and Chapter Twelve of the Clan-Building story arc.

On August 31, 2008, SLG's license to produce single issues of the Gargoyles comic ended. The material that would have made up single issues nine through twelve is included in the trade paperback collection Gargoyles: Clan-Building, Volume Two.

Can a Time Dancing Brooklyn change the course of human history - and should he? Can he find his way back to the present? And if so, who will he bring along to the dance?

The last chapter of "Clan-Building", and, for now, of the revived "Gargoyles". We open, appropriately, with Goliath seated on the battlements of modern-day Castle Wyvern, in his "Rodin's Thinker" pose, brooding over the misfortunes of his kind. We haven't seen Goliath awake since "The Rock", and his return makes a great way to begin the final chapter.

In 997, Brooklyn is still caught in the middle of the battle between Constantine III and Kenneth III - which is about to become worse now that Brother Valmont has seized the Grimorum and is ready to betray his former employer. (On an intriguing note, he is aware, like the Archmage, that the Grimorum is one of three magical objects needed to gain ultimate power.)

As the battle rages, we see many of the familiar combatants, some of whom we are only meeting now, others whom we had met in the series. Bodhe (only a young boy at this point) is already as timid as his future self in "City of Stone". Demona is ready to turn on her human allies, for being humans, when she is finished with Constantine. Mail Brigti confronts his half-brother Findlaech, eaten up with envy of his happier fortune. And Gillecomgain displays his own ruthlessness - especially as Constantine cries out that it is the night of the Hunter's Moon.

But the fighting takes an even darker turn as Brother Valmont uses the Grimorum to summon up a hail of arrows from the heavens to strike the combatants on both sides. The losses from this barrage are effectively presented; we see the grief of Demona's Second as his mate perishes (an amazingly poignant scene, in light of our only having just met her), and the horror of Mary and Finella as their faithful horse is also slain by the arrows. Even Mail Brigti's death from the enchanted arrows is a moving moment. Fortunately for the other characters, Brooklyn seizes the Grimorum from Valmont (by chopping off his hand!) and gets it to Demona, who is able to call off the arrows with a counter-spell - but in true Gargoyles fashion, she admits that while she can banish the arrows, those slain by them will remain dead.

Kenneth slays Constantine (but not before Constantine shrewdly predicts Maol Chalvim's later treachery against him) and the battle is over. But Brooklyn must now recover the Grimorum from Demona. When the Phoenix returns (Brooklyn's frustration at the Phoenix's coming for him before he can learn how things turned out is well-depicted), he tricks her out of the book, and then escapes with Mary and Finella into another time....

Back in the present, Goliath is greeted by the newly-returned Hudson, Lexington, Coldstone, and Coldfire. He is delighted to see his old rookery brother and sister back again - but even more astounded when Brooklyn shows up, with new company - only not the company you'd expect. After spending forty years being bounced about the time-stream by the Phoenix, he's back, with a family: his mate Katana, their son Nashville (or Gnash, as he likes to call himself), a gargoyle beast named Fu-Dog, and an egg named at present Egwardo (and we thought you were above such puns, Brooklyn). He's changed noticeably, including an eyepatch as well as various weaponry from different ages. (How he lost an eye should make a great story for another day.)

Elisa dashes into the middle of the reunion with news that Jackal, Hyena, and Wolf are on the rampage again - and stops, astonished at all the new arrivals. But the gargoyles all head off with her to Times Square to face the Pack. If the comic had continued with an issue #13, we'd no doubt be heading into a fresh story about the Pack - but even without it, it makes a fine open ending, showing that the clan still have a city to protect. And on the last page, as we see them heading into battle, we know that the gargoyles' plight is not as hopeless as it had once seemed, echoing Goliath's thoughts at the start of the chapter.

"Clan-Building" made a delightful continuation to the television series, with new stories and revelations. I am sorry that there are - for now - no more new stories to come involving the clan, but perhaps there will be more. And what we've gained has been a blessing. Long glide the clan.

The cover is an homage of the old Star Wars movie posters.

Gillecomgain's historical kinship to Macbeth and Findlaech is now reconciled with his depictions in the "City of Stone" multi-parter and "Hunter's Moon Part One" as a peasant.

Constantine is right to foretell trouble for Kenneth from Maol Chalvim. In the actual history of Scotland, Maol Chalvim would betray his cousin eight years later, slaying him at the Battle of Monzievaird, and seizing the Scottish throne as Malcolm II.

Brooklyn returns to the Manhattan Clan after 40 years of time traveling. This is the same amount of time that had passed in Goliath's vision of the future in "Future Tense" and Brooklyn's attire partially resembles his "Future Tense" appearance.