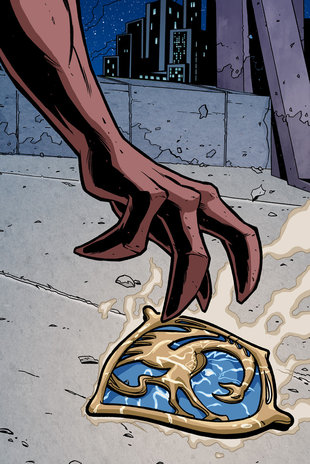 "The Gate" is the tenth issue of the Gargoyles comic by SLG, and Chapter Ten of the Clan-Building story arc.

On August 31, 2008, SLG's license to produce single issues of the Gargoyles comic ended. The material that would have made up single issues nine through twelve is included in the trade paperback collection Gargoyles: Clan-Building, Volume Two.

"The Gate." Brooklyn could really use some time away from the Clan, but when the time-traveling Phoenix Gate materializes before his eyes, maybe the phrase "look, but don't touch" should have come to mind. Careful what you wish for, Brooklyn!

This chapter begins Brooklyn's TimeDancing, an event I had anticipated from early on. For one thing, the consequences of his adventures, buffeted about the time-stream, would result in building up the clan (as we shall see when we reach the end of "Phoenix". For another, we knew from Greg Weisman that Broadway and Angela would be with Brooklyn when he came upon the Phoenix Gate, and once these three young gargoyles were left behind in New York in "The Rock", I felt certain that Greg was laying pipe for this scene. And I was right.

What I had not expected was *how* the Gate transported Brooklyn into the past. As Brooklyn reaches down to take it, the Gate disintegrates, and from it rises a monstrous bird made of fire - the Phoenix after which the Gate was named. Brooklyn is borne away by it, in a truly dramatic scene, carried off to Scotland in the year 997.

Through this unexpected time travel jaunt, we are reunited with old friends and enemies. Constantine, still the usurping King of Scotland, has made the young Gillecomgain (already filled with hatred for gargoyles after his encounter with Demona three years before) his squire; he also has the aid of the sinister sorcerer, Brother Valmont, a new character. Brooklyn, narrowly escaping them when the Phoenix deposits him in front of these three (plus Mail Brigti, Gillecomgain's father, whom we glimpsed earlier in "Hunter's Moon" Part One), finds himself in happier company: Mary and Finella, still on the run with the Grimorum Arcanorum, and hunted by Constantine. Brooklyn rescues them from some suspicious townsfolk, and they set off together.

Meanwhile, other human enemies of Constantine are gathering, under the leadership of the future Kenneth III (Bodhe's father), his cousin Maol Chalvim (whom we met in "Avalon" Part One), and Findlaech, Macbeth's father-to-be. Aware that they are outnumbered, Kenneth comments that their best hope is to revive the old alliance that their fathers made with gargoyles - but that's no easy task, with Constantine and Gillecomgain slaughtering all the gargoyles that they can find. As for Brooklyn, he realizes to his alarm that the only way of getting back to his own time will be to recover the broken pieces of the Phoenix Gate, and one of those pieces lies with his old enemy Demona....

Gargoyles' visits to medieval Scotland were among my favorite moments in the television series, and this does not disappoint; the story captures the tone of this bygone era effectively, weaving more of Scotland's early history into the story, just as "City of Stone" and "Avalon" Part One had done. I enjoyed this opening chapter, as well as the surprise team-ups of many of the familiar figures from the series' backstory, and looked forward to the next two chapters after that - which, fortunately, were not far behind....

Brooklyn finds the Phoenix Gate on the roof of The Daily Bugle. The Daily Bugle is a metropolitan newspaper owned by J. Jonah Jameson, which usually smears Spider-Man while, ironically, buying photos of him from Peter Parker. Given all the Gargoyles references in The Spectacular Spider-Man, it is nice to see Spidey referenced in Gargoyles.

Constantine's lie about Finella having a son who was murdered by Kenneth II is based on Holinshed's account of Kenneth's downfall, where Finella helps murder Kenneth to avenge her son's death.

Finella uses the name "Fiona" as an alias. Both Finella in "Avalon Part One" and Fiona Canmore in "The Last" were voiced by Sheena Easton.

The cry of the frightened townspeople, "Run away! Run away!" is a hommage to Monty Python and the Holy Grail.

Star Trek, so often in the background of Gargoyles, is explicitly mentioned at last, when Brooklyn mentions it as one of two television science fiction programs he's seen (Quantum Leap being the other).

In this issue, and the next two ("Tyrants" and "Phoenix"), the pages' background (surrounding the panels) is white during the daytime scenes and black during the scenes set at night and changes mid-page during the dawn and dusk scenes.