Satan as depicted by John Milton. 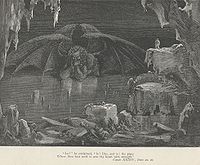 Satan as depicted in Dante's Inferno. 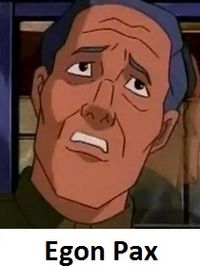 Satan as depicted by some Gargoyles fans.

Satan is the Prince of Darkness in Judeo-Christian tradition.

In 997, Constantine falsely claimed that Finella had "turned to sin and Satan" to murder Kenneth II. ("The Gate")

When Elisa Maza tried to persuade her brother Derek not to accept a job offer from David Xanatos, Derek replied, "No doubt you've got some snitch who'll tell me Xanatos is the Prince of Darkness." To which Elisa replied, "He practically is!" ("Her Brother's Keeper")

In Hebrew lore, Satan was originally depicted, not as a fallen angel in rebellion against God, but as a kind of prosecuting attorney in Heaven, who accused humans of the sins they had committed ("Satan" means "Adversary" in Hebrew - and here, in the sense of an opponent in court). He appears in that role in the first two chapters of the Book of Job, where he cynically suggests that the only reason why Job led such a righteous life was because of the blessings God had conferred upon him, and that he would stop praising God if those blessings were withdrawn. After the Babylonian Captivity, however, the more familiar notion of Satan as a rebel cast out from God developed, perhaps influenced by the war between Ahura Mazda (or Ormadz), the god of good and light, and Angra Mainyu (or Ahriman), the god of evil and darkness, in Zoroastrianism. Satan appears in that role in the New Testament, such as his unsuccessful temptations of Jesus (Matthew 4: 1-11 and Luke 4:1-13) and his battle with the archangel Michael in Revelation (12: 7-9).

In the final canto of his Inferno, the Italian poet Dante Alighieri (1265-1321) portrayed Satan as trapped up to his waist in the ice that fills the lowest circle of Hell, a gigantic figure with three sets of wings (constantly rotating like fans, thereby keeping the ice that traps him frozen) and three faces; his three mouths forever gnaw at the three greatest traitors in history, Judas Iscariot (who betrayed Jesus), and Brutus and Cassius (who betrayed Julius Caesar). In German legend, Faust makes a pact with Satan's servant, Mephistopheles. John Milton (1608-1674) made Satan a major character in his epic poem Paradise Lost, which recounted how Satan rebelled against God, was defeated, driven out of Heaven, and hurled into Hell, and how he tempted Adam and Eve in revenge.

Originally Demona's line of reference in "The Mirror" to the one Puck serves was specifically "You serve him, now you can serve me.". The line was altered to change "him" to "the human" due to an S&P executive's concern that "him" would be mistaken for Satan. [1]