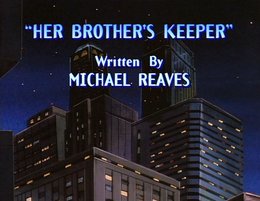 "Her Brother's Keeper" is the twelfth televised episode of the series Gargoyles, and the twelfth episode of Season 1. It originally aired on January 27, 1995.

Xanatos concocts an elaborate plot in order to get Derek Maza to work for him. Through the instructions of Fox, Xanatos has Jackal and Hyena attempt to steal the Coyote Diamond while Derek and Elisa are following him to the Diamond Exchange by helicopter. Xanatos saves the Maza siblings when Jackal attempts to kill them, then relies on the Mazas to protect him before offering Derek a job as his pilot and bodyguard. Despite Elisa's efforts to dissuade him, Derek takes the job, insisting that his sister keep out of his life. Elisa seeks the clan's aid in watching over Derek while he's at the Eyrie Building. The clan prevents Jackal and Hyena from killing Xanatos during two different assassination attempts, and the twins are arrested at Xanadu. Elisa admits to Derek she was wrong in not letting him lead his own life, but right about Xanatos. Unable to persuade Derek further, she leaves after giving him a tape recording of Fox admitting Xanatos' scheme.

The trio are at odds with each other, fighting over a helicopter simulator game, and later arguing while on surveillance of the Eyrie Building. Lexington just wants to track down Jackal and Hyena, Broadway thinks that helping Elisa with her brother is more important, and Brooklyn tries to keep them in line. They hijack the Pack's helicopter from Jackal and Hyena after they stop the twins from shooting down Derek and Xanatos, and Lexington crashes it into an alley while trying to land it. The trio work together to fix the helicopter and get it airborne so that they could keep up with Xanatos and Derek and follow them to Xanadu, where Jackal and Hyena's assassination plans are foiled for the second time. Later, the three gargoyles form a truce and congratulate each other on fixing the helicopter, which mysteriously disappears for the rest of the series.

Goliath tells Elisa to bring Derek to the clan so that they could prove to him Xanatos' bad intentions, but Elisa keeps finding excuses not to reveal the gargoyles to him. In the end, Xanatos tells Derek about the gargoyles, which annoys Elisa greatly, making it harder for her to tell him the truth about Xanatos.

Elisa speaks to her father at the Pool Hall about Derek, who agrees with Elisa about Derek taking a job with Xanatos, but for different reasons. Meanwhile at the Maza House, Derek talks with Diane, who agrees with him that he must choose his own path in life, unaware of Xanatos' malicious intentions. Elisa goes about trying to dissuade Derek in the wrong way, nagging him to turn down the job while not offering any real reason why he should, even approaching him in the men's locker room. Derek accepts the job in part to prove to Elisa that she is wrong.

Elisa visits Fox in prison to get information about Xanatos' plans for Derek. Fox gloats that Xanatos had her instruct Jackal and Hyena to hit the Diamond Exchange while Xanatos was there so that they would come after him. She reveals that Xanatos created the Pack, and that he told her to tell Elisa his plans since he knew she wouldn't be able to stop him.

"Why yes! Would you like an autograph? How about I write it across your face!" - man at Diamond Exchange and Hyena

"Hey, it's just like the simulator game back at the tower."
"Famous last words." - Broadway, Lexington, and Brooklyn

"Yeah, use the Force, Lex!" - Broadway and Brooklyn

"Oh yeah? You and what star fleet?" - Lexington and Brooklyn

Matt and Officer Morgan have cameos in the men's locker room scene.

Lexington displays his grudge towards the Pack from "The Thrill of the Hunt" again, showing himself to be more concerned with hunting down Jackal and Hyena than with resolving the Derek issue.

Derek Maza is properly introduced in this episode, although he had previously appeared in "Deadly Force" and had a cameo in "The Edge". At the end of the episode he quits the police force and takes a job as David Xanatos' personal pilot and bodyguard, a job that he will have until "Metamorphosis".

Fox and Wolf are in prison after being seen holding a woman hostage during the events of "The Thrill of the Hunt." Jackal, Hyena, and Dingo escaped incarceration because there were no human witnesses to their crimes.

Fox's statement that Xanatos is "The most brilliant man on the face of the Earth" foreshadows the revelation in "Leader of the Pack" that the two are a couple.

Fox also reveals in this episode that the Pack was put together by Xanatos, and that the other Pack members do not know this. Ironically, Xanatos uses the Pack's ignorance in order to take it over in "Leader of the Pack".

Elisa's reluctance to bring her brother to the gargoyles comes to light in "Revelations", when she admits to Matt that she liked being the only human the gargoyles confided in.

Snow begins to fall at the end of the episode. In the next episode, "Reawakening", the snow has settled.

The title, "Her Brother's Keeper", is derived from the biblical story of Cain and Abel; Cain, after murdering Abel, is questioned by God as to the latter's whereabouts and indignantly protests, "I know not; Am I my brother's keeper?". (Genesis 4:9) Elisa's concern (if overzealous) for her brother's well-being, of course, contrasts with Cain's fratricide. The original title was to be "Brother's Keeper", which would have displayed more clearly the focus on sibling relationships in the story (including alongside Elisa and Derek, not only the Trio and Jackal and Hyena, but even Goliath's lament over the deaths of his rookery brothers and sisters in the Wyvern Massacre).

The "gargoyle-copter" rebuilt by Lexington from the Pack's chopper was designed (like the motorcycle in "Temptation") as another potential toy for Kenner's Gargoyles line - however, Kenner rejected the idea altogether.

Brooklyn has clearly been acclimatizing himself all the more to the modern world, delivering such sci-fi-related quips as "Use the Force, Lex!" and "You and what Starfleet?" (references to Star Wars and Star Trek respectively).

Another hint of things to come is planted in this episode through the name of the Coyote Diamond; only two episodes later, an actual Coyote will enter the series with strong links to Jackal and Hyena (and the Pack in general), and to Xanatos. This is probably not a coincidence. The Coyote Diamond itself will reappear in "The Rock", where Xanatos uses it to improve the performance of Coyote 5.0.

This is the only episode in which Xanatos's upstate retreat of Xanadu appears. (The name was reportedly inspired by both the Xanadu of Samuel Taylor Coleridge's unfinished poem "Kubla Khan" and that of the movie Citizen Kane.)

A single scene with Hyena slicing the bow tie off the Star-struck Pack Fan was edited out of the episode.