From GargWiki
(Redirected from Derek Maza)
Jump to: navigation, search 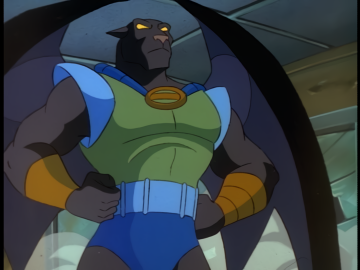 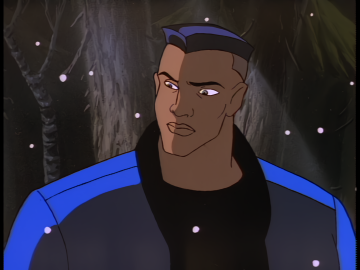 Derek Maza before his mutation

Talon, also known as Derek Maza, is the younger brother of Elisa Maza. After being turned into a mutate by Anton Sevarius, Derek chose the name Talon for himself and is currently the leader of the Labyrinth Clan. Some people, such as Al, refer to Talon as Boss-Cat.

Derek was born in 1970. After majoring in African-American Studies at Columbia University, Derek entered the NYPD like his father and his sister Elisa. [1] He became a helicopter pilot. He was not completely satisfied with this occupation, however, and when Xanatos offered him a job as both his personal pilot and bodyguard, Derek eagerly accepted it. Elisa, alarmed, did all that she could to urge Derek against it, but, in so doing, actually encouraged Derek to accept (largely because of his annoyance at her implied attitude that she knew better than he as to what was right for him). ("Her Brother's Keeper")

Elisa's worries were not unfounded, however, for Xanatos had lured Derek into his service with the intent of turning him into a mutate. He chose to make Derek one of his victims for his Mutate Project partly because Derek had the necessary leadership skills to take command of the other mutates, and partly as a means of neutering any possible threat from Elisa; Xanatos knew that she would think twice before attacking him if her own brother was serving as his bodyguard. [2] Xanatos and Sevarius then arranged for Derek to be injected with a mutagenic formula, and for Goliath to inadvertently destroy the "cure" that Sevarius had made for the young man. Derek, convinced that he would never be able to become human again, took command of the other mutates, using the alias of "Talon" to (for a short time) keep his fate hidden from Elisa. ("Metamorphosis")

After his transformation he and the others eventually re-entered Xanatos' service, due to their delusion that only Xanatos would be able to cure them. Goliath and Elisa tried to convince Talon that Xanatos was the very one responsible for his metamorphosis to begin with, but Talon, in denial, believed Xanatos' story that Goliath had been the one working with Anton Sevarius. When Goliath kidnapped Sevarius to try to force a cure out of him, Talon mistook his intentions, attacking and nearly killing the gargoyle in the abandoned Cyberbiotics underground research facility (soon to be Labyrinth). When Xanatos arrived to protect Sevarius, Talon finally realized the truth. He apologized to Goliath but turned down his offer to join the Manhattan Clan, opting instead to remain in the Labyrinth with the other mutates, his new clan. ("The Cage")

Despite his dramatically altered appearance, Derek was received joyously by his worried family when Elisa brought them to see him. ("The Cage") The Mazas' ability to see past his changed form and accept Derek bodes well for their eventual acceptance of the gargoyles and Elisa's relationship with Goliath (though Talon himself will not approve of the relationship). [3]

Talon and the other mutates left Xanatos' service and set up a home for themselves in the Labyrinth. There they took the local homeless people under their protection, forming a community of sorts where the weak are to be protected. Talon became the informal leader, but never saw himself as such; his reluctance to assume the responsibility of leadership allowed Fang to carry out a coup, setting himself up as the ruler of the Labyrinth and temporarily imprisoning Talon. The Trio, Hudson, and Maggie rescued him, however, and after imprisoning Fang in a holding cell, Talon recognized at last the need to take command, and promptly assumed that role of leading the community in the Labyrinth. ("Kingdom") One human, Al, eventually became a major-domo to Talon. ("Invitation Only")

Talon and Maggie developed a deep relationship over the months. Brought together by the traumatic transformation, and relying on each other for strength, they fell in love. In late 1996, Maggie became pregnant and between November of 1996 and May of 1997, they were married. ("The Rock", "Idyll or Nightmare")

Talon currently serves as an ally to the Manhattan Clan of gargoyles, if a not quite enthusiastic one; he has some difficulties getting along with them still, but Elisa visits him on occasion. He also maintains a grudge against Xanatos and Sevarius for transforming him into a mutate.

When Demona allowed herself to be captured for her cloning scheme with Thailog, Talon agreed to hold her in a cell next to Fang's. With Thailog's help, Demona and Fang escaped and led Talon and the gargoyles to an ambush at Coney Island. Talon fought with Fang, which resulted in a roller coaster burning and toppling over with Demona and Thailog on it when a stray electric blast missed its mark. Talon defeated Fang while the gargoyles subdued the clones. When the gargoyles showed their unease at taking the clones into their clan, Talon decided that they should live in the Labyrinth, thus creating the Labyrinth Clan and continuing the trend of taking outcasts and misfits into the mutates' care. ("The Reckoning")

Talon had another unfortunate encounter with Thailog a short time later during Halloween, 1996. After Goliath left the Labyrinth with Delilah, Thailog attacked the Labyrinth in order to claim "his property," the clones. Talon tackled Thailog when the latter shot at Maggie, saving her life, though she was injured by falling debris. Talon opted to stay and take care of Maggie instead of going to warn Goliath about Thailog's imminent arrival at the Eyrie Building, trusting Shari to go instead, which she didn't. ("Invitation Only", "Masque")

Much to Talon's relief, Maggie recovered. ("Reunion") His worry, however, convinced Elisa to bring Doctor Sato to the Labyrinth. She introduced him to the mutates so he could check Maggie's recovery and offer any advice on her pregnancy. Both as a surgeon and a doctor trained in human anatomy, Sato was unable to give much advice. ("The Rock")

The Labyrinth Clan isn't currently structured like a typical gargoyle clan. Talon was not chosen to lead by a former leader, but was seemingly elected to the position. Furthermore, he has no official second-in-command, though he probably assumes that Thug, Maggie, Claw or possibly even Delilah would be elected to fill his shoes should the need arise. [4]

Talon's mutate form combines genes from a black panther, a bat and an electric eel with his natural human DNA. He is very strong, can fly and is capable of producing powerful electric blasts.

Talon has some personality flaws which allowed him to be manipulated by Xanatos in the first place. He's stubborn and very opinionated, and doesn't like to admit when he's wrong, opting to delude others and himself into believing mistruths. He refused to listen to Elisa's advice concerning Xanatos, feeling that he had to prove to his family and himself that he has good judgement. ("Her Brother's Keeper") He lets his emotions overrule logic when things turn bad, and he's easily manipulated.

Despite all this, he's kind-hearted, just and charitable, helping others who can't help themselves by providing them with shelter. He has been able to have a relatively happy life despite the tragedy that has befallen him. He is also a Christian. [5]

As a human, Derek Maza was quite skilled at operating aircraft, most notably helicopters such as Xanatos' Helicopter or the Police Helicopter (which he managed to land once despite heavy damage), but he could also fly craft such as a glider and presumably other aircraft as well. As a mutate he has not had any need or opportunity to use these skills, though it is likely they were useful in enabling him to learn to fly using his new wings, as well as teach the other mutates this skill. This is perhaps one more reason Xanatos recruited him for the Mutate Project.