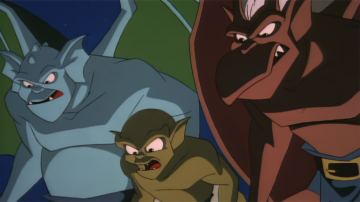 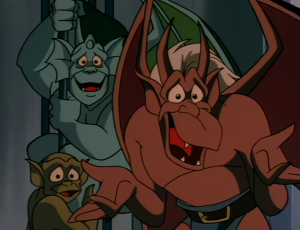 Trio is the joint name for Brooklyn, Lexington, and Broadway.

The trio are three rookery brothers born to the Wyvern Clan in 958. [1] They were already close friends by 994, and did practically everything together. This camaraderie lasted into the 1990s after their awakening, although it began to come to an end after their return to the castle in 1996, as Broadway began to spend more time with his future mate Angela, and Lexington with Alex. No doubt Brooklyn's return from his TimeDancer adventures, which left him forty years older than Broadway and Lexington, and with a family to boot, hastened this drift away from their being the gargoyle equivalent of the Three Musketeers. [2] Despite these changes, the three brothers will continue to be friends throughout their lives. [3]

The three gargoyles are occasionally referred to by 'The Trio' in the course of the series ("The Cage", "Future Tense"), but the term is used more often by staff and fans. In the trading card series, the Trio (under that name) have their own character card, as well as each gargoyle having his own independent character card.

To avoid comparisons to the Teenage Mutant Ninja Turtles, Greg Weisman had a "no pizza rule" for the Trio in the first season. [4]