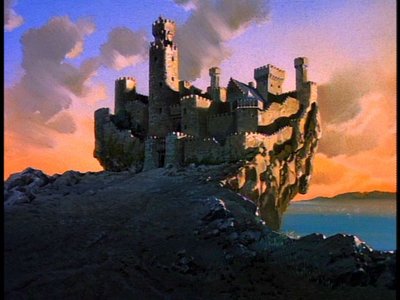 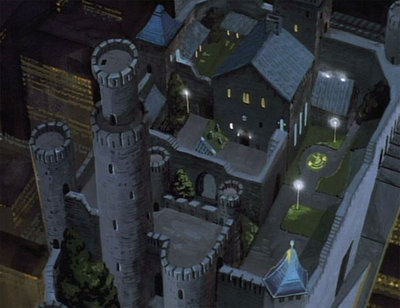 Castle Wyvern is the ancestral home of Goliath and his clan. Originally, it stood on Wyvern Hill, on the western coast of Scotland, but has since been moved by David Xanatos to New York City. [1]

There is evidence for a previous human occupation of Wyvern Hill before the building of the present castle, but Castle Wyvern itself was originally built in 971, after Prince Malcolm and Hudson formed their alliance. [2][3][4] Partly thanks to the ruins and still-intact foundation of the earlier stronghold, partly through the help of the gargoyles and the Archmage, the castle was completed by 975, when Prince Malcolm and Princess Elena were married. ("Vows") [5]

Castle Wyvern, thanks both to the natural defenses of its location and the help of the gargoyles and human soldiers, was close to impregnable. It stood on a rocky cliff atop the rookery of the local gargoyle clan, reachable only by a narrow causeway. By day, the human archers of Prince Malcolm and Princess Katharine defended it; by night, the gargoyles reinforced the garrison. For twenty-three years, the castle defied capture. (Gargoyles: The Dark Ages)

In 994, however, the Captain of the Guard and Demona, angered at the increasingly poor treatment and lack of gratitude that Princess Katharine and her court had shown the gargoyles, betrayed the castle to Hakon and his band of Vikings, who took the human residents prisoner and destroyed nearly all of the gargoyle clan. After the Magus turned the surviving gargoyles (except for Demona) to stone, Princess Katharine felt that it was no longer safe to remain at the castle, and left for her uncle Kenneth II's court, taking her people and the gargoyle eggs with her. Castle Wyvern was left deserted, its only inhabitants being Goliath and his fellow gargoyles, frozen in seemingly permanent stone sleep atop the battlements. ("Awakening: Part One", "Awakening: Part Two")

For a thousand years the Castle remained abandoned. The occasional squatter resided there, but not for long. [6] The castle developed a reputation for being haunted among the local population, perhaps thanks to the hauntings by the Captain of the Guard and Hakon's ghosts. The structure contained some wear and tear, but for the most part remained relatively intact.

In 1994 Xanatos arrived and quickly purchased the castle, hiring crews to dismantle and transported it to New York, where he rebuilt it to its pristine condition atop the Eyrie Building, making it into his personal headquarters. (For more information on the rebuilding and renovating of the castle, see this entry.)

Because the castle now rose above the clouds in its new location, the Magus' curse upon the gargoyles was broken, awakening them from their stone sleep (the reason for Xanatos' moving the castle). For a while, the gargoyles lived in Castle Wyvern, but after it became clear that it was too dangerous for them to share the same home with Xanatos, they moved to the clock tower. ("Awakening: Part Two", "Enter Macbeth")

For a time, Castle Wyvern was also home to the Mutates and to Thailog. It still remains Xanatos' home and headquarters and, after the destruction of the clock tower, became the home of Goliath and the Manhattan Clan once again. ("The Cage", "Double Jeopardy", "Hunter's Moon" Part Three)

Castle Wyvern is recognizable as a medieval castle, even after its renovation. The layout and form of the castle was not altered in any way during the move, though certain locations have changed their function. 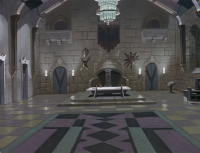 David Xanatos and Fox's wedding in 1995

The Great Hall, probably the largest space in the Castle was, in the Middle Ages, a typical castle hall. It was used for feasting and official functions, such as Prince Malcolm's wedding to Princess Elena. In the modern day, the Hall is no longer used as an eating area, but rather a grand foyer or main room. Elevator access from the rest of the Eyrie Building to the Castle seems to come in through this room. The room is decorated with tapestries and for a time the Grimorum Arcanorum was stored there in a glass case. A main desk is present in this room and sometimes smaller desks, tables and/or chairs and other furniture is kept here. The room's old dirt and stone floor was replaced with smooth tile and grand chandeliers and electric lights now hang where candles were before. Not all things have been altered however, the Hall retains most of the original stonework, and a secret entryway (hidden by a 12th century tapestry) on the south wall survived the renovation. Like Prince Malcolm and Princess Elena before them, David Xanatos and Fox wed in the Great Hall.

One tower of the Castle was long occupied by the Archmage. Later, the Magus took over the space in the tower. When the Castle was moved to Manhattan, Xanatos converted the tower into a laboratory. Fittingly, it was here that Coldstone was awakened using a mix of science and sorcery. 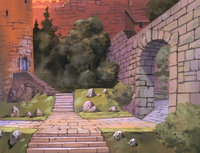 The castle contains several large courtyard areas. Though these were not modified as much as some areas of the castle, their function has changed dramatically. Once used for storage and the housing of refugees (such as Tom and Mary), the courtyard has in the modern day become more of a quaint park area, though the front yard has also been used as a helipad.

While Castle Wyvern is, of course, fictional, it is modeled after a real castle: Tintagel Castle in Cornwall, the legendary site of King Arthur's conception, and, in modern versions of the Arthurian legend, birth. [7]