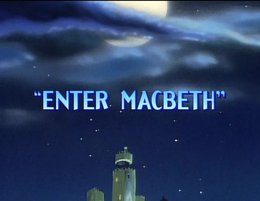 "Enter Macbeth" is the ninth televised episode of the series Gargoyles, and the ninth episode of Season 1. It originally aired on January 6, 1995.

Macbeth introduces himself to Xanatos while the latter is in prison, and offers to remove the gargoyles from the castle a week before Xanatos is to return home. Macbeth then goes to the castle at sundown and attacks the gargoyles after they refuse an invitation to stay at his home. He abducts Brooklyn, Lexington, and Bronx in order to lure Goliath to his mansion, and reveals that he's using the gargoyles in a doomed ploy to get Demona to seek him out. Goliath and Macbeth fight in the latter's medieval style mansion which goes up in flames during the battle. The gargoyles escape and Macbeth retreats.

Elisa uses Macbeth's attack as further proof that the gargoyles should leave the castle, but Goliath still refuses to listen to her.

Elisa, Broadway, and Hudson take the Grimorum Arcanorum from the Great Hall after defeating Owen, and leave the castle while Goliath is out confronting Macbeth. With Broadway and Hudson's help, Elisa finally convinces Goliath to leave the castle, but not before he tells Owen that the clan will return, before settling into the Clock Tower.

While in Macbeth's mansion, Brooklyn and Lexington figure out a way to let Bronx out of his cage by diverting the electricity from their own cage. Bronx escapes and finds Goliath, disrupting New York traffic and passersby in the process, and leads him to the abducted clan members.

Xanatos returns home from prison, and is intrigued by what has transpired between Macbeth and the gargoyles.

"What, you need a castle to fall on you?" - Goliath and Elisa

Macbeth is introduced in this episode (the first character from the works of William Shakespeare to appear in the Gargoyles universe). Although Demona does not appear, Macbeth mentions that he named her. This is finally seen in flashback in "City of Stone Part Three".

Elisa is still using crutches in this episode, after being shot in "Deadly Force".

The gargoyles take the Grimorum Arcanorum with them when they leave the castle. They will guard it there until "High Noon".

David Xanatos is released from prison in this episode, after being incarcerated in "Awakening Part Five".

"Enter Macbeth" suffered a severely-delayed release thanks to animation difficulties; the original version of it came out so poorly animated that it had to be extensively redone. This resulted in "Awakening" (all five episodes of it) being repeated on the Fridays between the premiere of "Deadly Force" (November 18, 1994) and that of "Enter Macbeth" (January 6, 1995), to buy the animators time. Fortunately, this repeat of the series opener allowed people who had only just discovered the series after "Awakening" first aired to see how it began, and does not appear to have done the program any great harm.

The episode's delay premiere prompted the inclusion of Previously on Gargoyles for non-multi part stories, though the VHS release omitted it. The segments were used for all episodes from "Leader of the Pack" to "Hunter's Moon Part Three".

This episode contains the first of many references to Shakespeare and his works throughout Gargoyles (stemming from Greg Weisman's fondness for the Bard). Alongside Macbeth, the Weird Sisters, Oberon, Titania, and Puck would all make on-stage appearances in the series, and other allusions would be made to Shakespeare's plays and characters (which will be duly noted in the entries for the episodes in which they appeared). Greg also had (currently) unrealized plans to introduce Queen Mab from Romeo and Juliet (as Oberon's mother), and Prospero, Ariel, and Caliban from The Tempest, introducing a modern-day parallel to Romeo and Juliet in the projected New Olympians spin-off, and even trapping the gargoyles and their associates in an actual performance of Macbeth (with Macbeth in the title role, Demona as Lady Macbeth, Goliath as Macduff, and Elisa as Lady Macduff).

Near the beginning of the episode, Hudson is watching a Donald Duck cartoon - judging from the way Donald is dressed, apparently an episode of Quack Pack (which, in real life, premiered in the fall of 1996, about two years after the events in this episode).