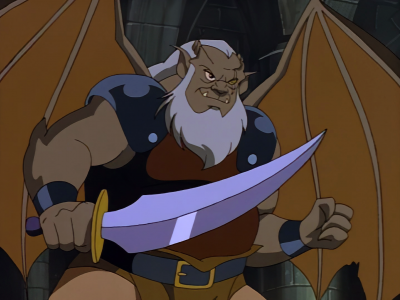 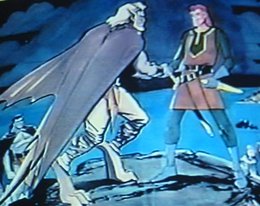 Hudson was a former leader of the Wyvern Clan, and is now the oldest member and mentor-figure of the Manhattan Clan.

Hudson was hatched in the year 878 in the rookery deep under Wyvern Hill. By 967 - presumably long before then - he had risen to become the clan leader. At some point prior to 967, he met Robbie for the first time, and made friends with him. Robbie introduced Hudson to Prince Malcolm in 971, and they formed an alliance that led to the building of Castle Wyvern. ("Once Upon A Time There Were Three Brothers...") [1]

Sadly, in 971 Hudson's Mate died under currently unknown circumstances. [2] Hudson and his mate are Broadway's biological parents, although this is known to none of them - and it wouldn't matter to any of them even if they did know. [3] They also had two daughters named Hyppolyta and True, who are now dead, Hyppolyta as a casualty of the Wyvern Massacre, though True survived it by at least three years.

Between 971 and 984, Hudson continued to lead the Wyvern gargoyles as steadfast allies to Prince Malcolm and his people. Malcolm may have given him a name at some point during these years, but (if he did) overtime it "didn't stick." [4][5] In many ways, he was much more intelligent than Prince Malcolm was. He correctly saw the danger in Malcolm using gargoyles as threats to scare the young Princess Katharine into good behavior (the danger that was fulfilled by her attitude towards gargoyles up to the Wyvern Massacre, which even helped lead to it), and he also recognized the treasonous schemes of the Archmage long before Malcolm saw them - sensing them as early as 975, in fact. By 984, he had already recognized Goliath's worth, and appointed the young gargoyle warrior his second-in-command. 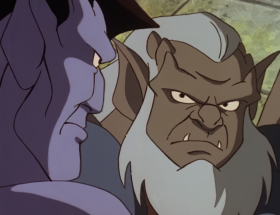 In 984, Hudson was blinded in one eye during a battle with the Archmage (the same battle that resulted in the evil sorcerer falling into a chasm to - so everyone thought at the time - his demise). Convinced that this condition and his age made him no longer able to lead, he stepped down as leader in favor of Goliath. Goliath insisted on keeping Hudson on, however, as an adviser, having always recognized that the older gargoyle’s experience and wisdom is what made him a good leader for so many years. ("Long Way to Morning")

Hudson survived the Wyvern Massacre in 994 because Goliath took him on his pursuit of the Vikings, but was afterwards frozen in stone sleep by the Magus for the next thousand years. Like the other gargoyles, he was awakened from his stone sleep when Xanatos moved Castle Wyvern to the top of the Eyrie Building (and became the oldest living gargoyle in history). ("Awakening: Part One", "Awakening: Part Two") During this time after the massacre, Hudson served unofficially as second in command of the survivors, but eventually insisted that not only would it not be proper for him to officially be second to his own former second, it would be more suitable for one of the younger Trio be promoted to that position. ("Upgrade")

Hudson is semi-retired now, thanks to his age and partial blindness. He feels that he's past his prime, and prefers to stay home (whether Castle Wyvern or the Clock Tower) while the rest of the clan is out on patrol, for the purpose of guarding it. (Bronx, with whom Hudson has a strong rapport, usually stays with him). 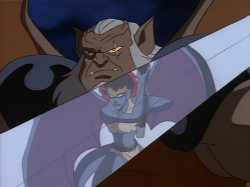 However, he can still be a formidable warrior when the occasion demands it, and once defended a wounded Goliath very effectively against Demona, holding her off long enough for the sun to rise and heal his leader. ("Long Way to Morning") He also demonstrated his resourcefulness in rescuing himself from Xanatos when the latter captured him to use as a guinea pig for the Cauldron of Life. ("The Price") 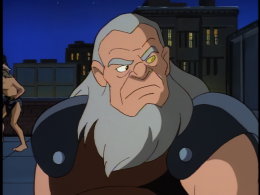 Hudson as a human.

Unlike the trio, Hudson is not particularly enthusiastic about the modern world. He feels lost and confused in it, all too aware of the dramatic changes that have taken place in the last thousand years, particularly in the realm of technology, and knows in his heart that he's too old and set in his ways to be able to adjust well to it as the other clan members have. However, he does enjoy one modern-day invention: television. He likes to settle down in an easy chair and watch it while the rest of the clan is out on patrol.

Like Broadway, Hudson was originally illiterate upon his awakening in Manhattan - and, unlike Broadway, ashamed of it; he covered it up, in fact, because of this. He finally revealed this secret to the blind author Jeffrey Robbins, whom he met when he was washed along the shore near Robbins' house during the fight for the Scrolls of Merlin. Robbins assured him that it was not shameful to be illiterate, but only to stay that way, and offered to teach him how to read. He and Robbins also became good friends. ("A Lighthouse in the Sea of Time") After this, Hudson undertook reading lessons with Broadway, practicing with the newspaper. ("High Noon") On Halloween 1996, Hudson finally revealed to Robbins the fact that he was a gargoyle, a fact that Robbins had already figured out. ("Bash")

In November of 1996, Hudson got the rare opportunity to travel abroad when he and Lexington elected to aid Macbeth in protecting the Stone of Destiny during its transport from Westminster Abbey in London to Scotland. When first waking up in London, Hudson experienced the gargoyle version of jet-lag ("The Rock"). While there, Hudson met Griff once again, along with two other members of the London Clan and stayed at the clan's home at Knight's Spur. Later, Hudson and the other gargoyles were attacked at Westminster Abbey by Coldsteel and Coyote 5.0, who were working under Xanatos' orders. Coldsteel nearly succeeded in ripping Hudson's arm off with his tentacles, but was thankfully stopped in time by Coldstone and Coldfire. ("Rock & Roll") After the Stone of Destiny adventure, Hudson and Lexington remained at Knight's Spur for a while, returning to the Eyrie Building with Coldstone and Coldfire in early 1997 - just in time to meet Brooklyn, newly returned from his Timedancing, and his family. ("Phoenix") 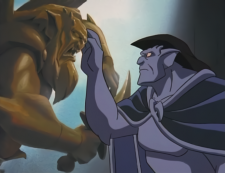 By the time Goliath arrived in Puck's "Future Tense" illusion, Hudson was already dead, and a life-sized bronze statue had been built as a memorial. He had perished years ago in single combat with Xanatos, although unbeknownst to all but Lexington, he managed to take Xanatos with him.

Hudson is a portly old gargoyle, with tan-colored skin, ruddy orange wings, and white hair and beard. His most distinguishing feature, beyond these, is his blind left eye. He has three small horns on each side of his forehead. He wears a tough leather jerkin and trousers in addition to the loincloth more typical of his clan, and carries a sword that he won during his attack on the Vikings' camp in 994. (Hudson uses the sword because he feels that, with his strength failing as he ages, he needs some sort of human weapon to help even things out for him.) Alone of the Manhattan Clan, he speaks with a Scottish accent, because he had the most contact of all the gargoyles with Scottish humans. [6]

Despite his clear gargoyle heritage and pride, Hudson does not enjoy gallivanting about on wild adventures, as he much prefers to remain home in an old recliner and watch television shows such as The Pack, Celebrity Hockey and Nightwatch. Greg Weisman explained that "Hudson hates spunk." [7]

Ironically, Hudson was the first member of the Wyvern Clan to take on a name in the 20th century, although he considered the concept of names nothing more than a peculiar human custom. He named himself after the Hudson River, after Elisa cited it to him as an example of how even geographical features have names. ("Awakening: Part Three")

Hudson evolved from a character in the comedy development called "Ralph". [8] Ralph was often the oldest gargoyle in the cast and much preferred staying at home with the TV and other comforts of modern living to actually going out. [9] In the earliest character drafts, he was given the last name "Fullmoon" and described as " Al Bundy but with worse luck." He was set up as a contrast with Alice Fullmoon, an eternal optimist. [10] When he was moved into the action-drama pitch, other names considered for him included "Rolf" and "Rock". [11] Greg Weisman would ultimately model Hudson after Lou Grant in his character description, with Ed Asner already in mind as a voice actor. [12][13] In 1993, some last minute alternative names included "Rockefeller", "Roosevelt", "Bowery", and "Harlem". [14]

Hudson appears as Old Soldier in The AllSpark Almanac Volume Two, as a playable character in the fictitious video game, Ninja Gladiator.