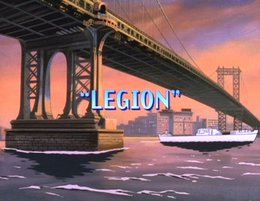 "Legion" is the sixteenth televised episode of the series Gargoyles, and the third episode of Season 2. It originally aired on September 6, 1995.

Coldstone becomes functional again, and controlled by a program designed by Xanatos, raids the Goldencup Bakery Building building and unintentionally downloads a computer virus. "Othello" is awakened and reunites with Goliath, who invites the cyborg to join the clan. However, Coldstone becomes tormented by the voices of "Desdemona" and "Iago" in his head. At Ellis Island, Goliath uses RECAP to enter Coldstone's mind through a virtual reality hookup, where he encounters the virus emerging from a swirling vortex which is slowly destroying everything. Goliath, Othello, and Desdemona team up against Iago merged with the Xanatos program to battle for control of Coldstone's mind. Iago is swallowed by the vortex and Goliath leaves his brother and sister to an unknown fate as the cyborg body temporarily shuts down.

Matt Bluestone is in charge of RECAP and uses it to try to stop the rampaging Coldstone in the Goldencup Bakery building, but Coldstone destroys it. Elisa secretly lends RECAP's virtual reality hookup and visor to Lexington so that Goliath can go into Coldstone's mind. Despite Elisa's attempts to dissuade him, Matt begins to track the gargoyles down through the use of a homing beacon. He calls in a SWAT Team of police boats and helicopters. The trio and Hudson are able to distract the police long enough for Goliath to return and the gargoyles escape notice.

A conflict between the four rookery siblings that has happened in the past resurfaces when Iago, jealous over Desdemona's love for Othello, convinces Othello that Goliath is trying to steal her away from him. Angered, Othello knocks Goliath into the vortex and he is in danger of being pulled down by the virus strands. Desdemona is able to convince Othello of Goliath's innocence and Iago's treachery, and Othello saves Goliath before he can be pulled down.

Another Xanatos tag reveals that Xanatos had given RECAP to the police, and also that he had awakened Coldstone in order for the cyborg to download classified defense specs for him in the Goldencup Bakery. Though Coldstone was unable to download them because of the virus, Xanatos is unphased, and decides that the virus itself is a deadlier weapon.

"How would you know? You never let me drive." - Elisa and Matt

"Without trust, there can be no clan." - Lexington and Goliath

The other two souls besides "Othello" that inhabit Coldstone ("Iago" and "Desdemona") are introduced in this episode. Pieces of the three stone gargoyles were used to create the cyborg, and through Demona's sorcery in "Reawakening", all three souls are trapped inside it.

The Goldencup Bakery Building reappears in "Vows" (where Goliath and Xanatos meet at the very beginning of the episode), and "The Reckoning" (where this time Demona breaks into it). Its real-life model was Silvercup Studios in Brooklyn.

After being reactivated, Coldstone rises out of the Hudson River below the George Washington Bridge, where he had disappeared at the end of "Reawakening".

Elisa continues the trend of walking the fine line of helping the gargoyles while keeping her partner Matt in the dark.

The Manhattan Clan stores Coldstone's comatose body at the clock tower at the end of this episode, where it remains until "High Noon".

The episode's title is (like "Her Brother's Keeper") ultimately drawn from the Bible: to be precise, a story in the Gospels when a demon-possessed man says to Jesus Christ, upon being asked his name, "My name is Legion: for we are many". (Mark 5:9) The immediate source, however, was a movie adaptation of Frankenstein which Greg Weisman had seen as a boy, where the hypnotized Frankenstein monster (composed of the remains of many bodies) utters the same line; since Coldstone was the Gargoyles version of the Frankenstein monster, such an element was obviously irresistible to Greg. [1]

The names "Desdemona" and "Iago" occur only in the ending credits, not in the actual episode. The names are an obvious derivation from William Shakespeare's Othello, fitting in with the parallel situation to that of the play (with Goliath in the Cassio role).

The audience is carefully prepared for the revelation at the end that RECAP's role in confronting Coldstone at the Goldencup Bakery was all part of Xanatos's plan; when RECAP rushes into the building at the beginning, the familiar scarab logo from "Awakening" can be glimpsed on its side.

Marty Isenberg & Robert N. Skir wrote an episode of Batman: The Animated Series, "What is Reality?", where Batman goes into a virtual reality world and battles the Riddler. [2]

In the Golden Cup building, the part where Coldstone popped a sort of Robocop claw to download the information from the computer was cut out.