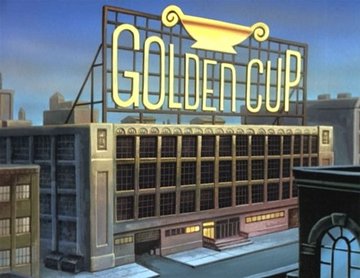 The Goldencup Bakery Building is a defense department research facility in New York City, specializing in developing advanced weaponry for the military.

It maintains the facade of a bakery to the outside world. [1] It has been raided twice since the gargoyles came to New York, once by Coldstone (under Xanatos' control) and once by Demona (as actually part of a trap to trick the clan into capturing her, in the adventure that would lead to the emergence of the Clones). ("Legion", "The Reckoning")

It was also here that Xanatos invited Goliath to his wedding. ("Vows")

The Goldencup Bakery Building is modeled after the real life Silvercup Studios in the borough of Queens. Silvercup was the primary shooting facility for HBO's The Sopranos, and Sex and the City. Not to mention Martin Scorsese's Gangs of New York among many other productions.

Perhaps it is best known as the site of the final battle between Connor MacLeod and the Kurgan (played by Clancy Brown) in the movie Highlander.