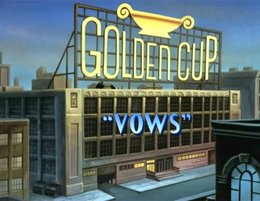 "Vows" is the twenty-first televised episode of the series Gargoyles, and the eighth episode of Season 2. It originally aired on September 14, 1995.

Goliath is invited to the wedding of Xanatos and Fox where he attempts to connect with Demona one last time. He brings along his half of the Phoenix Gate which has served as a symbol of his past love for her. This was all a ploy set up by Xanatos and Demona to reunite Goliath's Gate piece to Demona's so that they could travel back in time to 975, Scotland. While Xanatos sets up his scheme that explains how he started his empire, Demona tries unsuccessfully to alter the past to her liking by bringing her younger self to the Wyvern Massacre of 994. The past can't be changed, however, and the time travelers return to their own time, while Goliath sadly realizes that his relationship with Demona has permanently ended.

Xanatos and Fox are married, and Fox reveals that she legally changed her name.

Petros disapproves of his son's attitude and how he lives. Xanatos invites him to his wedding then brings him along with Fox on his time traveling journey, believing he would prove his self worth to his father. At the end of the adventure, Petros gives Xanatos a penny as a wedding gift, citing that money is all that his son cares about.

Goliath comes in contact with the Hudson of his past, who helps Goliath by keeping his younger self from investigating the goings on while he attempts to stop Demona.

The Archmage of the past wishes to obtain the Phoenix Gate to secure ultimate power for himself. He fails to obtain it when he sends attackers after Princess Elena and the Norman Ambassador to steal it from the princess, but they are thwarted by Xanatos, Fox, and Petros. He orders his apprentice, the young Demona, to steal the Gate from Elena and bring it to him. She does so, but after her horrific encounter with her older counterpart, she breaks it in half to share with Goliath during the wedding of Elena and Prince Malcolm.

Xanatos sends two envelopes off with the Norman Ambassador to bring to the Illuminati Society. He informs the Society to wait a thousand years then send the first envelope to him in 1975 with a coin given to him by Malcolm- the same coin that he used to procure his fortune. The other envelope would be sent twenty years after the first one containing instructions on how to set up the whole scheme.

Demona urges her younger self to use the Phoenix Gate to rule over her fellow gargoyles and the world. The young Demona is horrified by her counterpart and wants nothing to do with her. She stops her from attacking Goliath and asks him what she should do about her tragic future. He tells her to do nothing, but to always fulfill her vows of love. When the travelers return, the current-day Demona remembers his words, and tells him that it didn't change anything.

Elisa is jealous that Goliath went to see Demona, and is annoyed at him for going to the wedding. Hudson remembers his past encounter and doesn't stop Goliath from going.

"Oh, reason not the need, father. I wanted it, so I took it." - Petros and Xanatos

"This is your wedding! Have you no respect for anything?"
"I'm sorry, pop. I'm in a bit of a hurry." - Xanatos and Petros

"A marvelous time." - Xanatos and Fox

"And I suppose you glided back in time on the wind?" - Goliath and Hudson

"But you won't, because you didn't. Time travel's funny that way." - Goliath and Xanatos

"More's the pity." - Demona and Goliath

"A simple American penny. It's not worth much now, but in a thousand years, who knows? It's my wedding present to you, because it's all you seem to care about." - Xanatos and Petros

Although the Illuminati Society had previously been mentioned in "The Edge" and "The Silver Falcon", it is only in this episode that we learn that the society is real. We also learn that the Society already exists by 975 (the Norman Ambassador accompanying Princess Elena is a member of it), and that its symbol is a fiery eye atop a pyramid (tied in with the conspiracy theories relating to the similar symbol on the Great Seal of the United States). One can infer that the Illuminati must also have a phenomenally efficient archiving system, since they are able to accurately follow Xanatos's instructions to them one thousand years later.

We also learn that David Xanatos is himself an Illuminatus, which will next be referenced in "Revelations", and followed up in "The Journey", "Invitation Only", "Masque" and "Bash".

The Phoenix Gate appears for the first time in this episode, and we learn that history cannot be altered. Goliath takes the Gate at the end to safeguard it, and will do so until "High Noon".

As Goliath retrieves his half of the Phoenix Gate from its place in the clock tower, the dormant Coldstone (from "Legion"), the Grimorum Arcanorum (from "Enter Macbeth"), and the Eye of Odin (from "Eye of the Beholder") are shown in storage nearby. All of these items will also be taken from this storage room in "High Noon".

The Archmage says that by combining the Grimorum, the Phoenix Gate and the Eye of Odin he will achieve "ultimate magical power". We will eventually see him do so in "Avalon Part Two". The items grouped together are later revealed to be named as the Three Keys to Power in "Phoenix".

Xanatos and Goliath have their opening battle atop the Goldencup Bakery Building, which first appeared in "Legion".

Xanatos and Fox are married in this episode. Xanatos had proposed to Fox in the previous episode, "Eye of the Beholder".

In this episode, Goliath comes to realise that he can never restore his relationship with Demona to the way it was prior to the Wyvern Massacre.

In the Dark Age scenes in this episode, Goliath almost refers to Hudson by his name, before remembering that in this time period he has not yet chosen a name for himself. ("Awakening Part Three") None of the gargoyles in these scenes have names.

In the Dark Ages scenes, the younger Hudson does not carry his trademark sword (which he obtains in "Awakening: Part Two"), and has not yet been blinded in one eye (which occurs in flashback in "Long Way to Morning").

Petros Xanatos appears for the first time in this episode. He will later appear in "The Gathering Part One".

Judge Roebling also appears for the first time. He will appear again in "Masque".

It is also revealed that Princess Elena, Princess Katharine's mother, is of Norman descent. Since the Normans were the descendants of Vikings who had settled in northern France early in the 10th century (the very name "Norman" is a shortening of "Norseman" or "Northman"), it appears that Princess Katharine might have been more closely related to Hakon than would have pleased her...

Greg Weisman originally conceived of the Phoenix Gate in "Vows" as merely a magical object that Demona was attempting to take from Goliath, using its significance to him as a memory of their love for each other to manipulate him; the notion of its particular power being time travel came very late in the episode's development. He has since admitted that the episode should have been a two-parter to introduce the concept of time travel more effectively into the series.

Xanatos's "Reason not the need" comment to his father (when Petros asks him why he needs his many possessions, such as Castle Wyvern) is a Shakespeare quote, from King Lear, Act II, scene iv. There, the parent-child situation is the reverse of the situation here, for it is Lear who utters that line to his daughter Regan, when she asks him why he still needs so many knights attendant upon him following his abdication.

After Demona shows up for the wedding, a close up of her saying "I neither know nor care why you're here." to Goliath shows her wings open behind her while she had just folded them and they are still folded after that shot.

There are two endings because one was a mistake that the production team couldn't get corrected in time for its first airing. That scene was supposed to be a flashback to Goliath and Demona embracing at the castle. Instead it mistakenly has them embracing at the clock tower, which they've never done.

Unfortunately, the wrong ending is the one that ended up on the DVD release.

The Disney Plus version also contains the wrong ending.