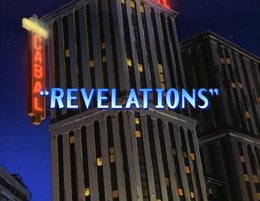 "Revelations" is the twenty-eighth televised episode of the series Gargoyles, and the fifteenth episode of Season 2. It originally aired on October 26, 1995.

Matt Bluestone's suspicions about the Illuminati and Mace Malone turn out to be correct when he locates the man by finding out about his dead wife through his stepson, Jack Dane. Malone offers Matt membership into the Illuminati if he delivers a gargoyle after letting him know of Elisa's connection to them. Elisa finally introduces Matt to the gargoyles, and he and Goliath formulate a plan in secret so that it would seemingly appear that Matt turned Goliath over to Malone at the Hotel Cabal, in order for Matt to obtain proof of the Illuminati's existence. His plan fails when he's forced to prevent Mace from executing Goliath, but to his shock he is later inducted into the Society by his old FBI partner, Martin Hacker.

Matt finds out from Pine Lawn that Malone goes to his wife's tomb every Thursday with a rose. Matt confronts him with his knowledge that Malone had been forced to leave his wife and stepson many years ago because his dealings with organized crime made him a marked man when the criminals found out he had been spying for the Illuminati.

While sneaking into the Hotel Cabal, Goliath and Matt fall down separate chutes that were triggered by Malone. Mace then proceeds to torment Goliath through a loud speaker, presumably to get information from him, and puts him through several dangerous obstacles until Goliath utilizes the key that Matt had given him previously to make his way out. While Matt escapes the hotel with Goliath, Mace loses his key and is trapped and left to die by the Illuminati.

Matt comes close to finding out about the gargoyles when he catches Elisa in a lie and finds their roost in the Clock Tower. He learns the whole truth when Malone tells him of her connection to them, a piece of information that David Xanatos had provided the Illuminati. Matt feels betrayed and angry that Elisa didn't let him in on the secret, and nearly drives her car over a cliff in order to get her to admit about the gargoyles. After Matt becomes an ally to the clan, he asks Elisa why she didn't tell him sooner. She confesses it was because she didn't want to give up the stigma of being the gargoyles' only human friend (which sheds some light on why she hadn't told her family about them until it was absolutely necessary).

It is revealed that Martin Hacker is an Illuminati member and was partnered with Matt by the Illuminati when they were in the FBI together so that Hacker would lead Matt on false trails to the Society. Hacker provided Matt with the information to find Jack Dane in the witness relocation program, believing it would be another dead end. Matt proved him wrong when he finally found Malone. Hacker tells Matt that the Illuminati was impressed with his relentlessness and that he was able to bring a gargoyle to Malone.

"You should see the dental plan." - Matt and Malone

"It's not that I didn't trust you. I guess...I just didn't want to share them. As long as I was the only human they confided in, it made me feel...special." - Matt and Elisa

The Illuminati's pyramid-and-eye symbol appears again (Mace even has it tattooed on his hand).

Matt also discovers that the gargoyles exist, and that Elisa has been helping to keep them a secret from him. When he finds their living quarters in the clock tower, he notices the television set that Elisa carried into the station in "The Edge". He becomes an ally to the Manhattan Clan after this episode.

Martin Hacker, Matt's former FBI partner who appeared in "The Silver Falcon", reappears in the this episode. He is also revealed to be an Illuminatus. Hacker's next appearance is in "Invitation Only".

Matt is made a member of the Illuminati. This is next mentioned in "Invitation Only".

Jack Dane appears for the first time in this episode. He reappears in "Turf".

Originally, the episode was considered as a tie-in with Disney's "Tower of Terror" ride, and the Hotel Cabal went by the name of the Hollywood Tower. Disney later on changed its mind, however, while the script was being worked on, and the "Tower of Terror" references were promptly dropped.

For this episode only, Captain Chavez was voiced by Elisa Gabrielli (who also played Obsidiana in "The Green"), rather than her usual voice actress Rachel Ticotin. (Elisa Gabrielli reprised Chavez's role in the Radio Play at the 2009 Gathering.)