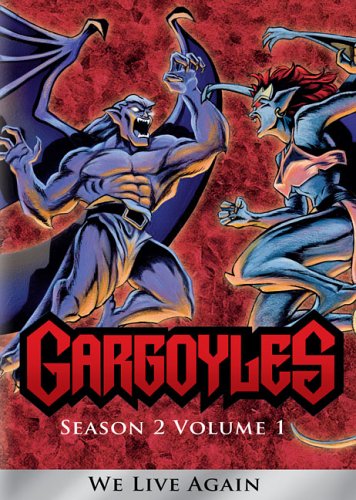 Gargoyles: Season Two, Volume One was released on DVD on December 6th, 2005. [1] A second DVD release was first revealed back in May 2005 when, in an effort to research "for a potential bonus feature", a producer for the DVD visited the Station 8 Comment Room. [2] Greg Weisman later confirmed the release a week later on Ask Greg. [3]

The ancient struggle between heroes and villains continues among the skyscrapers and bridges of a modern metropolis as GARGOYLES returns for a second season. It's an adventure 1,000 years in the making! The suspense builds in Season 2 as archenemy Demona unleashes a plot to turn the entire population of New York into statues, and flashbacks reveal even more of the history of these legendary figures. Enjoy the first 26 episodes of the second season of GARGOYLES in this special 3-disc DVD set complete with hours of exclusive, fan-requested bonus features.