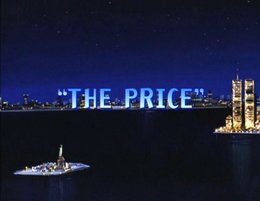 "The Price" is the thirty-third televised episode of the series Gargoyles, and the twentieth episode of Season 2. It originally aired on October 12, 1995.

The Cauldron of Life is introduced in this episode. In "Cloud Fathers", we learn that Xanatos has melted the Cauldron down to rebuild Coyote.

Xanatos reveals his desire to become immortal in this episode, although there were hints of that ambition in "City of Stone Part One.

Owen Burnett's fist is turned to stone in this episode, and remains stone for the rest of the series.

Hudson keeps the piece of his fake statue self until the clock tower blows up in "Hunter's Moon". It is unknown if Elisa was able to recover the memento from the wreckage or if it had shattered to pieces in the explosion. [1]

This story was inspired by the Lee Nordling's Gargoyles story "Stone Cold" from Disney Adventures, which used the core concept of a gargoyle in stone sleep being kidnapped and replaced by a lookalike statue (though the gargoyle in Nordling's story was Goliath).

In the original screenplay, Goliath and Lexington, during their visit to Macbeth's mansion, had a run-in with Banquo and Fleance (both feeling perturbed by their employer's mysterious absence). This scene was changed in the televised version to Goliath and Lexington facing Macbeth's automated defenses instead.

Hudson makes the only reference in the entire series to bathroom functions when he calls the Cauldron of Life an "oversized chamber-pot".

It is fitting that a vital ingredient in the Cauldron of Life's spell is a piece of gargoyle stone skin. Gargoyles do not age during their stone sleep. Bathing in the Cauldron would thus allow the person to "live as long as the mountain stones", effectively locking them into a permanent gargoyle stone sleep, where they do not age, but are solidified. So Owen's fist is not stone, but more accurately the same organic substance resembling stone that gargoyles become every dawn.

When Goliath attacks the Macbeth robot after it has destroyed the Hudson statue, in the original version he puts his whole arm through "Macbeth". Here it has been edited so that it appears that Goliath only punched him (Actually it looks like he only tapped him) instead of putting his arm through him.