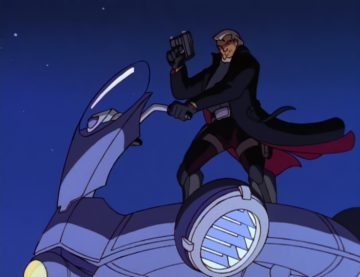 One of the Macbeth Robots. 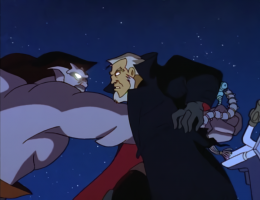 The "Macbeth Robots" were two robots created by David Xanatos to resemble Macbeth.

The Macbeth Robots were apparently intended to battle the Manhattan Clan until dawn and force them to sleep on an exposed rooftop where Xanatos could abduct Hudson and replace him with a statue. The plan was to keep the gargoyles occupied for "a night and a day" while Xanatos experimented with the Cauldron of Life, using Hudson as a test subject. The first robot threw some kind of powder on Hudson, making the gargoyles believe it was a magical powder that turned gargoyles to stone at night. The robot was destroyed when its sky-sled crashed, but the second robot showed up the next night and continued attacking the clan. Eventually Goliath destroyed it as well, in the process revealing that it was a robot. ("The Price")

The Macbeth robots looked and sounded just like Macbeth, and even used his signature lightning gun. Their programming is slightly more advanced than the Xanatos's Steel Clan. [1] However, they had a very limited vocabulary, with only four phrases at their disposal.

In December 2006, to help catch up with the backed-up queue of unanswered questions on Ask Greg, Greg Weisman minimized his responses to submitted Gathering Conjournals using each of the Macbeth Robots' four phrases. [2][3][4][5] He still, however, enjoyed reading each of the Conjournals. [6]