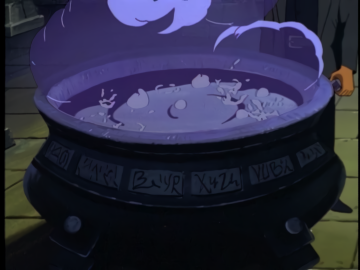 The Cauldron of Life. 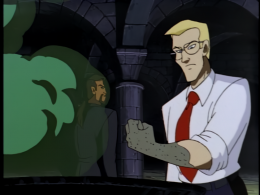 The price for using The Cauldron of Life.

The Cauldron of Life was a magical cauldron, made of iron, and thus presumably created by a human wizard (and apparently one with a twisted sense of humor).

According to legend, it possessed the key to immortality; if a special brew (which included a piece of gargoyle stone skin in its ingredients) was made in it and someone bathed in it afterwards, that person would live "as long as the mountain stones." The stone skin had to boil in the special brew for a night and a day before being used. In fact, the brew would turn anything dipped in it into literal stone (it's also possible that it might actually be the same organic substance that gargoyles become during the day). [1][2]

Xanatos obtained the Cauldron of Life and decided to use it as a means of becoming immortal, capturing Hudson to use both as a source for the necessary piece of stone skin, and as a guinea pig. When Hudson escaped, Owen volunteered to test it, and dipped his hand into the Cauldron's brew; his hand was promptly turned to stone. Xanatos was mildly disappointed, but out of his usual desire not to waste anything, he melted the Cauldron down and used it to create Coyote 4.0., intending to use this robot's iron composition as a means of turning it into a "Kachina trap," particularly for Coyote the Trickster. This also failed in the end, however. Whether Xanatos recovered the resulting wreckage of the robot for the metal of the cauldron is unknown. ("The Price", "Cloud Fathers")

The Cauldron is a large iron pot several feet across and clearly quite heavy. It is appropriate that a gargoyle's stone skin is linked to immortality, since while in such a state gargoyles do not age and all biological processes cease. Thus, Owen's hand is not stone, but is organic and is in the same state that the gargoyles were in when frozen in sleep by the Magus. Owen's hand is still alive in a sense and does not suffer from erosion. So, ironically, someone who would bathe in the Cauldron could conceivably live longer than the mountain stones.

The Cauldron of Life contains a strong echo of the various magical cauldrons of Celtic mythology. Throughout the legends of the Celts, there are stories about cauldrons with miraculous properties. One that particularly echoes the Cauldron of Life was the Cauldron of Bran the Blessed, a mythical god-king of ancient Britain; this cauldron would restore to life a dead man laid within it, although he would not be able to speak. Another (or perhaps a different version of the same cauldron) was the Cauldron of Annwn, which King Arthur, according to the Welsh poem "Preiddeu Annwn," attempted to carry away from Annwn, the Welsh Otherworld. It was rimmed with pearls and warmed by the breath of nine maidens; it bestowed great wisdom upon its user, but would not boil the food of a coward. Many Arthurian and Celtic scholars believe that such cauldrons may have helped give rise to the legends about the Holy Grail.