For the horse of the same name, see Magus (horse) 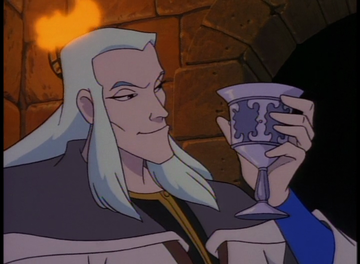 The Magus was the wizard who cursed the gargoyles, trapping them in stone sleep. His real name is unknown, "Magus" being the Latin word for "wizard", and therefore a title.

The Magus was born in the year 966. In 982, he had already become apprenticed to the Archmage, though not for long, thanks to the evil sorcerer's banishment for treason. [1][2] From there, he became the new court wizard for Castle Wyvern and chief adviser to its ruler (by 994, Princess Katharine). Like Katharine, he disliked the gargoyles, considering them unnatural creatures. During this time, he also fell in love with her, if in a somewhat hopeless manner. ("Awakening Part One") 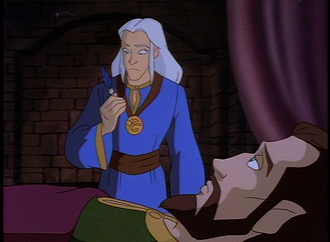 The Magus with Prince Malcolm in 984.

In 994, the Magus was captured alongside the rest of Katharine's household when the castle fell to the Vikings. When the surviving gargoyles arrived to rescue the humans, Hakon furiously tried to kill Princess Katharine. The Magus mistakenly believed that he had succeeded, and, blaming the gargoyles for this, cast a spell upon them from the Grimorum Arcanorum, causing Hudson, the trio, and Bronx to enter stone sleep "until the castle rises above the clouds".

When he discovered that Katharine was not dead, and that Goliath had actually saved her life, he was remorseful of his rash action, but he could not reverse his spell, since Hakon had burnt the page with the counter-spell upon it. He did, however, at Goliath's request, place the same spell upon the gargoyle leader, and agreed along with Katharine to watch over the gargoyle's rookery children. ("Awakening Part One", "Awakening Part Two")

Afterwards, the Magus accompanied Princess Katharine, Tom, and the the eggs to Kenneth II's court. He soon began to write a magical record with a personal account of the Wyvern Massacre and of their travels in the Grimorum Arcanorum. ("Avalon Part One") [3][4]

When the following year Kenneth was murdered by Constantine, who then seized the throne and tried to force Princess Katharine to marry him to solidify his position, the Magus had to take action to protect both Katharine and the eggs. Using his magical knowledge, he smuggled them out of the castle and took them to Avalon. Their path was barred, however, by the Weird Sisters, who denied them entry and attempted to turn them into owls. The Magus reflected the Sisters' spell upon them, but knew that he could not bring the Grimorum Arcanorum into Avalon, it being an object of human magic. He entrusted it to Finella and Mary, while entering Avalon with the Princess and Tom. ("Avalon Part One")

Meanwhile, in Scotland, the Magus was considered a wanted fugitive by Constantine. Eventually, Brother Valmont convinced Constantine that the Magus had "left this world" and no longer posed a threat. ("The Gate", "Tyrants") 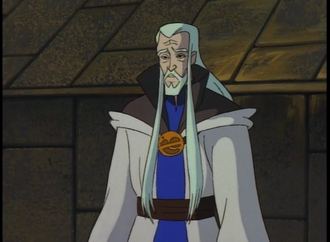 An older Magus on Avalon.

This was true. On Avalon, the three humans raised the eggs together. The Magus noticed, with the passing of the years, that Katharine and Tom had fallen in love with each other. Because of his own love for the Princess, he was heartbroken, but remained on Avalon to raise the young gargoyles out of atonement for having turned the gargoyles to stone. He spent much time by himself when not raising them, and in the process, learned how to harness the intrinsic magic of Avalon, although he did not find it an easy feat.

When the Archmage and the Weird Sisters attacked Avalon, the Magus was convinced that he lacked the strength to defy them without the Grimorum. But when Elisa came to the island with Goliath and Bronx and announced her intent to awaken King Arthur Pendragon from his enchanted sleep in the Hollow Hill to recruit him for the defense of the Avalon Clan, the Magus accompanied her. Using the raw magical energy that he tapped from Avalon, he defeated the two animated suits of armor that guarded Arthur's sleeping place.

In the battle that followed, the Magus fought against the Weird Sisters, and finally utilized his magical strength to transform the two suits of armor, which were made of iron, into a chain that bound them fast. However, the strain of this act was too much for him, and he died soon afterwards, laid to rest on the very bier upon which King Arthur had slept for over a thousand years. ("Avalon Part Three")