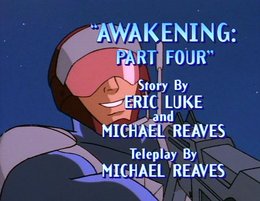 "Awakening: Part Four" is the fourth televised episode of the series Gargoyles, and the fourth episode of Season 1. It originally aired on October 27, 1994. 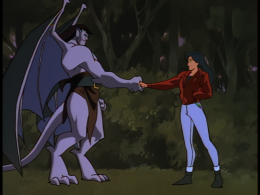 Elisa and Goliath escape from the Commandos, but Goliath has been shot with a tranquilizer and turns to stone at dawn. Elisa leads the attackers away from his stone form and defeats them one by one, she then guards Goliath during the day. A bond of trust is cemented between them. Later, Xanatos reunites Goliath and his long lost mate, who convinces him to help Xanatos in tracking down the "stolen" disks. Goliath and Demona are assigned the Cyberbiotics airship, and the trio are sent to the Cyberbiotics Tower.

The trio continue their exploration of the city, and make their way back to the castle. Brooklyn attempts to call a cab, but the driver turns around the moment he sees the gargoyles.

Elisa notices the Scarab Corporation logo on the transmitter on Goliath that led the Commandos to them.

The trio and Bronx receive their names.

Demona and Xanatos tell Goliath a contrived story of how she survived the Wyvern Massacre.

Goliath is disturbed by Demona's behavior on the airship with her callousness towards human life. He stops her from killing a man in cold blood.

Vinnie has his first bad encounter with Goliath while on security duty on the airship.

The trio break into the Cyberbiotics Tower and are faced with guards holding guns.

"We would have, if you hadn't eaten the entire cartful." - Broadway and Brooklyn

"What?"
"It's a new word we learned last night."
"It indicates a positive response." - Brooklyn, Goliath, Broadway, and Lexington

"We've dreamed for a thousand years Goliath, it's time for our dreams to come true." - Goliath and Demona

"If humans wish to throw away their worthless lives guarding it, that's their concern." - Goliath and Demona

"The centuries have made you weak, Goliath." - Goliath and Demona

The Alice in Wonderland sculpture that Elisa runs past while pursued by the Commandos is an actual Central Park landmark, but it was not shown for mere local color. The animators deliberately placed it there (as Greg Weisman and Frank Paur explained on the DVD commentary for "Awakening") to symbolize Elisa's having "fallen through the rabbit-hole into Wonderland", in a sense, through having met the gargoyles and becoming involved in their adventures.

The Jogger, another familiar recurring figure, appears in the series for the first time as he passes Elisa watching over the stone Goliath.

Vinnie makes another cameo as a Cyberbiotics guard (though we won't discover that it was he until "Vendettas").

When Hudson is channel-surfing, we have a brief glimpse on the television screen of the scene at the beginning of The Lion King where Rafiki the baboon holds up the young Simba.

Greg Weisman has humorously suggested that the stray dog whom Elisa plants the tracking device upon in Central Park is actually the grown-up puppy in the dog food commercial that Bronx growls at (another sad case of an out-of-work actor going downhill).

Xanatos' first name is revealed in this episode to be "David", obviously to provide a reversal of the biblical tale which Goliath's name is derived from.

The names chosen for the supporting gargoyles are particularly appropriate, in that they reflect how well their bearers respond to the modern world. Hudson, the most conservative member of the clan, who has the strongest difficulties adjusting to the 20th century, takes his name from a river, a natural feature that had been part of Manhattan even before the humans came to dwell there. The Trio, on the other hand, who are filled with enthusiasm over their new surroundings, take their names from man-made features of New York, two streets and a borough. (As for Bronx, his name was no doubt chosen on the grounds that it was the New York place-name that most evoked an animal's bark or growl!)

During Elisa's battle with the Xanatos squad in the park, one scene where Bruno reloads his weapon is fixed so that we don't actually see the weapon being reloaded but instead see a close-up of his face. Also it looks like a small bit was taken out of his one-on-one battle with Elisa.