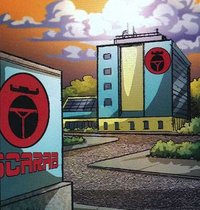 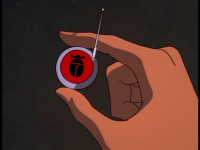 The Scarab Corporation is a robotics firm owned by Xanatos Enterprises; its logo is a scarab-like beetle.

The Scarab Corporation created the tracking devices that Xanatos has twice secretly placed upon Goliath. The firm has also created RECAP, the Steel Clan and Iron Clan robots, and probably Xanatos' gargoyle-like exo-suit, the various Coyote robots, the Coldsteel and Coldfire robots, and the Macbeth Robots. They probably also had a hand in constructing the cybernetics used by Coldstone, Jackal and Hyena.

In late 1996, Xanatos beckoned Coldsteel to the Scarab Corporation headquarters to enlist his help in an errand and team him with the latest Coyote robot. ("Reunion", "The Rock")

The Scarab Corporation was never actually mentioned in the series until "Reunion". It had been planned to play a more central role originally, but later on was discarded as Xanatos came to be increasingly portrayed as much more ready to deal with the gargoyles directly instead of through intermediaries. [1] However, though the name didn't appear until much later in the series, the firm itself was alluded to in "Awakening" and "Legion".