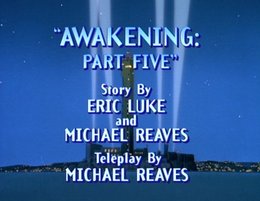 "Awakening: Part Five" is the fifth televised episode of the series Gargoyles, and the fifth episode of Season 1. It originally aired on October 28, 1994.

After Elisa reveals to Goliath that the diskettes his clan "retrieved" never belonged to Xanatos, Xanatos and Goliath's mate - who reveals her name as "Demona" - show their true colors, attacking the gargoyles with the Steel Clan, a team of gargoyle-shaped robots that were brought on-line thanks to the information on the stolen disks. The gargoyles manage to destroy the Steel Clan, and soon after, Elisa rescues Goliath from death at the hands of Demona. Goliath rescues Elisa when a stray rocket causes the tower on which she and Demona are standing on to collapse, leaving Demona to fall. Goliath then nearly kills Xanatos, but relents, allowing him to be arrested for receiving stolen goods. The castle is won, opening the way for a whole new adventure...

Demona destroys Fortress-1, causing it to crash into the Hudson River. Elisa sees her and Goliath flying away from the wreck.

The trio are successful in obtaining the disk from the Cyberbiotics Tower. Hudson and Bronx run into some trouble when they are accosted by security guards in the underground base, but they manage to escape with their disk.

Goliath argues with Demona, realizing that she's not the same person he remembers. He leaves her to see Elisa. Demona permanently cuts herself off from Goliath.

Demona reveals that she helped the Captain with his plan to betray the castle, which led to the Wyvern Massacre. She rants that all humans should pay for the way gargoyles have been treated.

"Go ahead. Without me, you'd still be gathering moss." - Goliath and Xanatos

"I hope you have more, lots more. But whether you do or not, I'll always be your friend Goliath." - Goliath and Elisa

Hudson's line "And they say the Middle Ages were barbaric!", while amusing, is (from a perspective of strict realism) questionable. The term "Middle Ages" only came into existence after the medieval period, as a way of describing (in a patronizing fashion) the period of history between the classical age of Greece and Rome and the rediscovery of its art and literature during the Renaissance. Nobody in 994 would have recognized the term. One could, of course, assume that Hudson had picked it up from some of his television watching (maybe a historical documentary), although it would have been fast work.

The scarab logo of the robotics company owned by Xanatos that manufactured the tracer is that of the Scarab Corporation, which was originally designed by the Gargoyles Production Team as one of the leading divisions of Xanatos Enterprises, alongside PackMedia Studios and Gen-U-Tech. However, it received far less attention than these other divisions, thanks to the fact that stories involving its products focused on the products themselves (such as Coyote) and did not involve the corporation staff at all (unlike stories featuring Gen-U-Tech, for example, where Sevarius was certain to play a prominent role). We get another brief glance at that same logo in "Legion", and the firm is finally named "on-screen" and shown in "Reunion".

The scene where Demona reveals her name is another hint that she was lying about having been under the Magus' spell for the past thousand years like the rest of the clan. If she had actually been in stone sleep during that time, she would scarcely have had the opportunity to have gained it from a human "long ago".

Demona's line of "1,000 years of solitude" is a reference to the title of One Hundred Years of Solitude by Gabriel García Márquez.

When Demona fires her bazooka at Goliath, in the original it showed the bazooka light up right before cutting to commercial and now it just stops short to when Demona and Xanatos come out with rifles and goes to commercial.

Also in the same episode, when Demona says "If you are not my ally then you are my enemy" you usually see her fire the bazooka head-on at the camera and then Goliath dodge the missile in the next scene. On Toon Disney, when Demona says her line, it cuts back to the scene of Goliath with tears in his eyes as you hear the bazooka fire and then goes to the scene of Goliath dodging the missile.