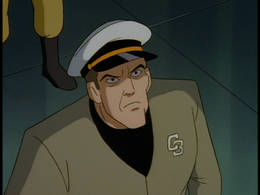 The Fortress-1 Captain was the captain of Fortress-1. Under his watch, Goliath and Demona snuck on board the airship to steal a data disc for David Xanatos.

But rather than just steal the disc, Demona damaged the ship's guidance system and set the bridge on fire, crashing the ship into the Hudson River. It is highly unlikely that he survived the crash. ("Awakening: Part Five")