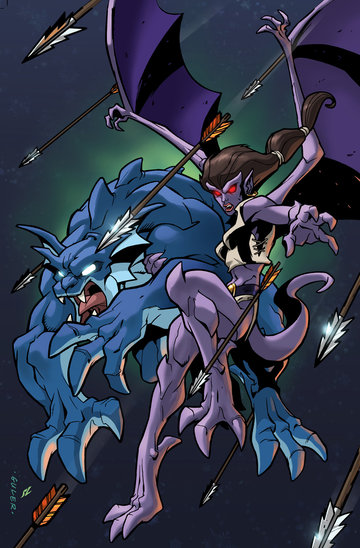 "Reunion" is the sixth issue of the Gargoyles comic by SLG, and Chapter Six of the Clan-Building story arc. It was released on October 10, 2007 and a reprint of the issue (to correct errors) was released on November 14, 2007. The issue was reprinted in Gargoyles: Clan-Building, Volume One.

What promises Yetis, monks, deadly archers and long-lost cyborg-zombie rookery siblings with multiple personality disorder? That's right, it's Clan-Building, Chapter 6: Reunion. Thailog's new executive assistant keeps him busy with a tale of World Tour's past, as Goliath, Angela, Elisa, and Bronx journey to Tibet and encounter an old friend... or perhaps a foe.

Shari relates to Thailog the untold Avalon World Tour tale about Goliath, Angela, Elisa, and Bronx arriving in Tibet and encountering Coldstone. They find themselves in a laundry pot of a monastery where they are mistaken for Yeti and attacked by archers at Sangpo's command. They flee to a nearby cave where Coldstone is hiding out. Sangpo and Master Dawa arrive, and the latter explains that he has been helping Coldstone deal with his inner struggles. Goliath and Angela express their desire for Coldstone to join them. Not wanting to risk the lives of his children on Avalon, Coldstone pretends to switch to the Iago personality, attacking the others and threatening Elisa's life so that he could knock them all unconscious simutaneously. The travellers later wake up on a lake in Shambhala. Shari's story ends and she hints that the adventure has a significant purpose not yet revealed.

The trio and Angela are outside the castle, and they are glad that Goliath and Maggie are healing from their clashes with Thailog.

Angela figures out that her rookery brother Gabriel is Coldstone's biological son.

"Reunion" might be described as an intermission between the Double Date story (#3-#5) and the next adventure of the gargoyles (to begin in #7). While it is framed by events in the present of the Gargoyles Universe, the bulk of the story is a flashback to the Avalon World Tour.

The flashback is narrated by Shari (how she learned about the events in it is not explained, though her high rank in the Illuminati might have something to do with it) to a restless Thailog, who's in the mood for a bedtime story. It deals with a visit that Goliath, Elisa, Angela, and Bronx made to Tibet during the World Tour; while there, they encounter Coldstone, who has gone there to live in seclusion since the events of "High Noon". The cybernetic gargoyle has been seeking help from Master Dawa, the head of the local monastery, in order to contain Iago - but despite Dawa's help, Coldstone clearly does not trust his ability to stop his evil rookery brother from usurping control of his body. So much so, in fact, that he pretends to have been taken over by Iago and knocks out the travellers, as the only way he can think of to dissuade them from reuniting him with the clan.

The story is a trifle rushed, in order to fit into a single issue (see one possible reason for that below, in the Tidbits section), but it contains some effective moments. The visit to Tibet opens with the amusing notion of having the skiff arrive in a laundry pot, showing that Avalon can transport one to very small bodies of water indeed (as fans have speculated). Master Dawa is an enjoyable new character, combining wisdom with such examples of verbal wit as "As for your fellow acolytes... their souls are fortunate that their bodies are such lousy shots" and "Listen with your heart, Sangpo... if that doesn't work, I'll translate later." (Elisa provides a delightful line of her own when, after first experiencing the cold of Tibet, she wonders aloud whether they shouldn't find out if Avalon needs them to be in Hawaii instead.) And, through the mouth of Angela, Greg Weisman finally officially confirms what sharp-eyed Gargoyles fans had suspected since "Avalon" Part Two: Gabriel is Coldstone's biological son - a revelation that startles Coldstone considerably. (Judging from his own comments, however, he clearly views all the young gargoyles on Avalon as his children, as per gargoyle tradition.)

The framework contains some fine moments of its own, that advance the present-day story a little more. On the opening pages, Angela and the trio are shown outside the castle, having clearly decided to venture out of it once more rather than hide within its walls (as Broadway points out, there's no point doing that in light of Thailog's recent attack). Thailog has now adopted the mannerisms (and even the attire) of a Roman Emperor, having Shari feed him grapes - but Shari's own actions indicate that she is more than equal to the scheming clone, making her all the more interesting a character. (She seems particularly delighted in being privy to information that Thailog does not know.) And on the final pages, we see Xanatos, presumably about to embark on the mission that the Illuminati had assigned him in #5, making contact with his new ally - Coldsteel, appropriately enough. Apparently his making a robotic body for Iago in "Possession" was not for entirely altruistic reasons after all...

"Reunion" is based on a story that Greg Weisman had written for the original Gargoyles comic book produced by Marvel Comics, though the comic was canceled before the issue containing that story could be published. "Possession" alluded to it at the beginning, when Xanatos tracks Coldstone down in the Himalayas, but the details of the story itself remained a mystery to the fans, until the release of this issue.

Since the story had to be altered to include the scenes between Thailog & Shari and Xanatos & Coldsteel, the following had to be removed from the story as originally planned:

The first printing of "Reunion" had the misfortune of containing a great number of production errors. Among these were the omission of the logo and title on page 1, a repeat of the art for page 16 on page 12 (but with the speech balloons that belonged on page 12), and the wrong lettering style for "Scarab" on page 23. Greg Weisman apologized to the fans on Ask Greg. A new printing of issue #6 was released by SLG correcting those and other small errors, and offered in exchange at no charge to fans who bought the first printing. The trade paperback collection also corrected these errors.

The title itself is another example of Greg Weisman's penchant for not letting anything go to waste, as "Reunion" and "Reunions" were both very early titles for "The Gathering" two-parter. [3][4]

Elisa alludes to "The Green" in her description of the laundry room as "hotter than the rain forest".

Many of the monks mistake the gargoyles for yeti, though Master Dawa knows better and corrects them. It is as yet still unknown whether yeti exist in the Gargoyles Universe (though, since Dawa states that they never had wings, they can't have been based on gargoyle sightings).

At the end of the flashback, the skiff is mentioned as having been taken to "a beautiful lake in Shambahla". Shambahla (more commonly spelled "Shambhala") is a "real" legendary place like Avalon, which figures in Tibetan myth as a secret kingdom famed for its enlightenment and mystical wisdom.

Although the Scarab Corporation's logo was featured in "Awakening" and "Legion", this is the first time that its name has appeared in canon.