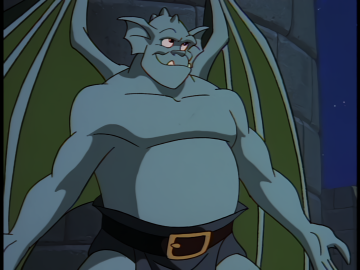 Broadway was hatched in the year 958, and in his youth became good friends with his rookery brothers Lexington and Brooklyn, forming the trio. [1] He survived the Wyvern massacre in 994 thanks to the three of them and Bronx being in the rookery at the time, having been sent there by Goliath for getting into a fight with some of the humans in the castle (although actually, Broadway had not participated in the fight at all; he was merely sitting close by peacefully eating, and Goliath lumped him in with the others). ("Awakening: Part One") Afterwards, Broadway was put under the Magus' curse of stone sleep with the other gargoyles, to awaken in 1994. ("Awakening: Part Two") 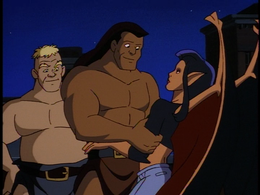 Broadway as a human.

Broadway is the strongest of the trio, and a good fighter, but also gentle and sensitive. He is one of the best judges of character in the clan, and has a strong sense of concern about his fellow clan-mates and friends. He particularly shows this for Elisa, helping her out whenever he can. Much of this is thanks to guilt on his part; Broadway once inadvertently shot Elisa with her own gun, and feels very regretful about that still. His protectiveness towards the detective is one result of this incident; another is a very strong dislike of guns. He won't handle them, and even destroys them if he encounters them. ("Deadly Force")

Broadway also displays this sensitivity in his relationship with Angela. While Brooklyn pursued her merely because of her good looks and availability, and Lexington because Brooklyn and Broadway were courting her, Broadway actually got a sense of what Angela was like as a person, her likes and dislikes, her aspirations and her fears. For example, early on, he realized that she disliked her nickname "Angie", and so stopped calling her that; Brooklyn and Lexington did not discover that on their own, but had to learn it from her the hard way. ("Turf") This led to her acceptance of him as her mate. Indeed, they will even have three children in the future: Artus, Gwenyvere, and Lancelot. [2]

Broadway likes to eat, as his tremendous girth confirms. Brooklyn and Lexington often tease him about it, as well, which he takes with great dignity. But Broadway is no mere winged garbage disposal. Alongside his relationship with Angela, he also has a strong interest in mysteries and detective work, particularly enjoying detective movies on television. Indeed, his interest in these helped him in aiding Elisa to solve the Silver Falcon case which led to the arrest of Tony and Dominic Dracon. ("The Silver Falcon") Broadway figured out the real reason for Elisa's behavior during the time that she was pretending to be a "crooked cop" in order to shut down Tony Dracon's protection racket. He and Goliath helped her solve that case as well. ("Protection") His good observation skills, already noted in the matter of his relationship with Angela, are very useful to him in this area. 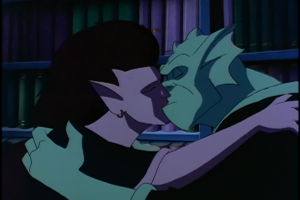 Originally, Broadway was illiterate, and proud of it, considering books a waste of time. His attitude changed, however, during the Scrolls of Merlin adventure, when he saw how Macbeth, by reading about King Arthur's reign, could describe it so eloquently that it had seemed almost as if he had been there. ("A Lighthouse in the Sea of Time") Broadway began taking reading lessons afterwards with Hudson (who also learned the value of reading in that adventure), first reading the newspaper with him. By the time that the gargoyles were living in the castle again, Broadway had moved on to Shakespeare's Romeo and Juliet, which he read with Angela. ("The Journey")

Broadway and Angela will become closer over the years and eventually become bonded mates. Indeed, they had already mated by early 1997. [3] It is possible that they will journey to Avalon in the future, at least for a visit. [4] 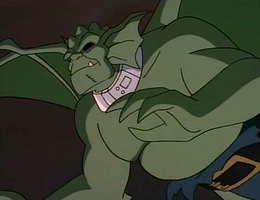 In the "Future Tense" illusion, Broadway was blind, having lost his eyes in the resistance against Xanatos. He eventually died after an attack by the Thailog Shock Troops.

Physically, Broadway is big and somewhat overweight, but still very muscular and strong. He has aquamarine skin, a bald head with three horns running over the center, and fin-like ears. While Broadway once referenced his large ears in being able to overhear Elisa's conversation on the phone, he was most likely engaging in self-deprecation [5]

Broadway took his name after awakening in New York in 1994, naming himself after Broadway Avenue in New York. (We assume that he did not have in mind any word-play involving his own bulk when he chose it, but rather its theatrical connotations).

Broadway is the biological son of Hudson and his mate. However, neither they, nor anybody else, know this, and it would not matter to them even if they did know. [6]

994. September 30. Sent down to the rookery by Goliath, who thought he had gotten in a fight with humans along with Brooklyn, Lexington, and Bronx. ("Awakening: Part One")

October 1. Wyvern Massacre occurs. The surviving gargoyles attack the Viking camp to save the humans. Frozen in stone sleep by the Magus along with his two brothers, Hudson, and Bronx. ("Awakening: Part Two")

1994. October 4. David Xanatos builds Castle Wyvern atop his skyscraper above the clouds in Manhattan, breaking the sleep spell. Broadway awakens with the others, just before getting in a fight with Commandos who apparently steal three diskettes and escape. One guard tells Broadway he has a "Nice Mask". ("Awakening: Part Two")

October 6. Chooses his name. The clan is tricked by Xanatos and Demona into "retrieving" the three diskettes. The trio raids the Cyberbiotics Tower and successfully steals one of them. ("Awakening: Part Four", "Awakening: Part Five")

November 17. Goes to see the movie Showdown for the first time.

November 18. After seeing the movie again, goes to Elisa's place and accidentally shoots her with her own gun. He brings her to Manhattan General Hospital and doesn't go back to the castle. ("Deadly Force")

November 19-20. Goes on an anti-gun rampage. He and Goliath converge at Tony Dracon's warehouse, where they destroy the guns and have Dracon arrested. Broadway confesses to Goliath that he shot Elisa to prevent Goliath from killing Dracon. They visit Elisa at the hospital and Broadway apologizes. ("Deadly Force")

1995. January 4. Sides with Elisa in helping her convince Goliath to move from the castle. The gargoyles take up residence in the clocktower. ("Enter Macbeth")

February 3. Joins the battle on the George Washington Bridge, and gets tangled in some cable wire. Later, Goliath swears an oath that the clan will protect the citizens of Manhattan. ("Reawakening")

September 7. Spots Maggie while on patrol with Brooklyn. Sees that Maggie would rather go with the Gen-U-Tech guards but helps Brooklyn try to save her. They're unsuccessful but Broadway takes her tracking bracelet to the clan. ("Metamorphosis")

September 23-24. Captured by Macbeth while trying to steal back one of the Scrolls of Merlin from him. The Clan arrives to save him, but Macbeth releases him and gives them the Scrolls after realizing that they're Merlin's journals and not magic spells. Broadway realizes the importance of reading, and begins taking lessons with Hudson. ("A Lighthouse in the Sea of Time")

October 27. Visits Elisa's apartment to pick up the trio's Halloween costumes that she helped them order through the mail earlier in the month. [7][8] Offers to help a resistant Elisa in investigating Matt Bluestone's disappearance. Rescues Elisa from Pal Joey at Matt's apartment, then saves them both from a bomb that Joey planted. ("The Silver Falcon")

October 28. Brings Elisa to the old Silver Falcon place and gets trapped in a cave-in at dawn by Dracon's men. He figures out the "Falcon" mystery from a letter written by Mace Malone and helps Elisa outsmart Dracon who is thereafter arrested along with Dominic Dracon. ("The Silver Falcon")

November 13-14. Goes with the clan to Macbeth's mansion and takes down Macbeth with Hudson. Captured and chained at Central Park along with the others by Iago working through Coldstone, and the Weird Sisters working through Macbeth and Demona. The clan is saved by Elisa and Othello. ("High Noon")

December 15. Utilizing a tip from Fox and a plan by Brooklyn, the trio rescue Goliath, Hudson, Elisa, and Bronx from the upgraded Pack. Goliath chooses Brooklyn as his second-in-command, for which Broadway is supportive. ("Upgrade")

December 19. Follows Elisa with Goliath and nearly blows her cover during her assignment posing as a crooked cop. Broadway figures out the ruse, and the two gargoyles aid her in busting Dracon's protection racket scheme. ("Protection")

December 23. Turns to stone in mid-air while fighting the Macbeth Robot. Elisa uses quick thinking to save him. ("The Price")

1996. January 6. Notices the disappearance of Goliath, Elisa, and Bronx. Brings Cagney to the clocktower. ("Kingdom")

May 19. Joins forces with his brothers and Hudson to help King Arthur and Griff locate Excalibur, and battles Macbeth and his minions. ("Pendragon")

May 25-26. After spotting Hyena breaking into the American Museum of Natural History, he and Lexinton attack her, and prevent her from destroying the Mayan Sun Amulet. Broadway considers destroying the amulet, but hides it in the clocktower instead. ("The Green") [9]

July 9. The Avalon World Tour travellers return home. Broadway meets Angela, and offers her a half-eaten box of chocolates. He later aids his clan in the fight with Oberon. ("The Gathering" Part One)

July 19. Bitten by a robotic mosquito that samples his DNA, in order for Thailog to create Hollywood.

August 2-3. Enlisted along with his brothers and Angela by Elisa to help her take down the gang factions of Dracon and Tomas Brod. Broadway engages in constant arguments with his brothers over the attention of Angela. The gargoyles succeed in stopping the gangs' turf war, and the trio apologizes to Angela for their behavior. ("Turf")

October 16-17. Volunteers to be used for Puck's soul transference spell in order to segregate the three souls of Coldstone. His body is possessed by Othello's spirit, while Desdemona possesses Angela. He and Angela grow closer after this. ("Possession")

October 25. The Hunters blow up the clocktower. The gargoyles are revealed to the public at large on national news. ("Hunter's Moon" Part Two)

October 26. Fight at Saint Damien's Cathedral between the clan, Hunters, and Demona. Xanatos saves the gargoyles after they become trapped on the roof of the cathedral, and brings them to Castle Wyvern. ("Hunter's Moon" Part Three)

November 1. Fight with the clones after Thailog stabs Goliath. Thailog gets samples of DNA from the whole clan. ("Bash")

November 2. Elects to stay in Manhattan when Macbeth seeks the clan's aid with the Stone of Destiny. ("The Rock")

Broadway grew out of a female gargoyle character from the comedy development. [10] She was first called "Isa Dora", then "Coco". [11] She shared Broadway's general body type and gentle personality. She loved to sing and dance, but had little talent for either (though her ability to crack glass while singing could have proved useful). [12] When she was being considered as part of the action-drama cast, she was renamed "Belushi" (after Jim Belushi's late brother John). With a change of gender and a couple of other modifications, this gargoyle evolved into Broadway. [13][14] The "Coco" name was later reused as a nickname for the London Clan gargoyle Constance, who shares some traits with the original Coco.

Two stone gargoyles with a striking resemblance to Broadway appear in the pilot episode of The Spectacular Spider-Man: one which Spider-Man web-slings past along with a stone Goliath and Hudson, and later another which is destroyed while Spider-Man battles the Vulture and the Enforcers.