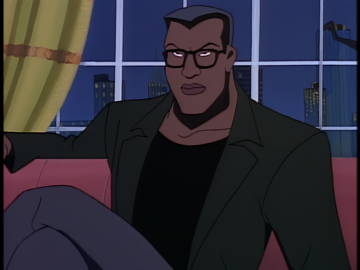 Glasses is Tony Dracon's consigliere and second-in-command; one could almost describe him as being to Dracon what Owen is to Xanatos.

Glasses has known Tony since their early teens. [1] By the time they were in their twenties, Dracon was the youngest major "wise guy" in New York City. Glasses served as his right hand man.

When Dracon stole a shipment of particle beam weapons from Xanatos Enterprises, Glasses sold at least thirty-seven of them on the streets to cover expenses while Dracon was preparing to sell them back to Owen Burnett. While doing this, he was attacked by Broadway who demanded to know who he was working for. ("Deadly Force") After Dracon was released on bail, Glasses assisted him in his criminal enterprises, including searching for seventy-year-old stolen jewels under the Silver Falcon and blowing up Art and Lois's restaurant when they refused to pay into Dracon's protection racket. ("The Silver Falcon", "Protection")

When Dracon was sent to prison, Glasses ran his operations on the streets, including his chop shop and fought in a turf war against Tomas Brod and his Czech mob. Glasses was arrested after the turf war decimated both sides. ("Turf")

Greg Weisman has stated that in the future, he would have liked to see Glasses emerge as more of a leader than a follower. [2]