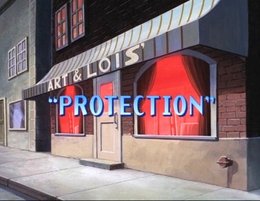 "Protection" is the thirty-first televised episode of the series Gargoyles, and the eighteenth episode of Season 2. It originally aired on November 13, 1995.

Elisa goes undercover as a crooked cop and starts a power struggle with Dracon for a sting operation to bring down his protection racket that blackmails small business owners. Elisa meets with Dracon and offers a partnership with him, which he readily accepts after Goliath and Broadway arrive and offer their services as well. Elisa and Matt trick Dracon into admitting his scheme to a hidden camera in Mr. Jaffe's store, and Dracon is once again arrested after being apprehended by Goliath while trying to escape.

Dracon's men plant a bomb in Art and Lois's restaurant since Art refused to pay the protection fee. The news reports about these bombings gets the attention of Goliath, who is angered immensely at the perversion of the gargoyles' greatest instinct.

The police can't stop Dracon without a confession from him so they set up several stings. In one sting, Morgan and Captain Chavez pose as owners of a dry cleaners that's being harassed by Dracon's men. When they don't comply with the demands, Pal Joey gasses them and plants a bomb. Luckily, Broadway arrived on time to drop the bomb in the Hudson River.

Elisa, Matt, and Chavez put on a show for Pal Joey at the Precinct so that he would report Elisa's odd behavior back to his boss. Later, Elisa intimidates Dave, one of Dracon's "clients", in order to get a meeting with the gangster.

Goliath and Broadway, unaware of Elisa's assignment, attack Dracon's men after seeing Elisa going into a car with them to meet with Dracon. Elisa scolds the gargoyles in a condescending manner in front of the men. Broadway realizes that Elisa is undercover, and he and Goliath follow her to Dracon, who likes the idea that he can control the gargoyles through Elisa.

Matt works undercover at Mr. Jaffe's store as a sales clerk and lures Dracon there by telling Glasses he wants to speak to the one in charge of the operation, citing that Elisa is working the same area. The trap works when Dracon arrives with Elisa and gives Matt the rundown of the operation. When he realizes Elisa has tricked him, a fight breaks out, but is effectively ended when Goliath grabs Dracon and drops and subsequently catches him from the air.

"I was fine until you came along! I told you stop following me everywhere. What are you, a puppy?" - Goliath and Elisa

"So, she's your woman, huh? I can understand that. You've got good taste my friend." - Goliath and Dracon

"We provide our own transportation." - Pal Joey and Goliath

This is yet another good episode for guest appearances; Travis Marshall, Officer Morgan, and Mr. Jaffe all turn up in this story.

Art and Lois are introduced. They later re-appear in "Hunter's Moon Part One" and "Nightwatch".

The very first scene (the man hailing a taxi) is re-used from "Awakening Part Four".

Goliath pronounces "dry-cleaners" in the same slow and careful fashion that he had pronounced "detective" in Season One.

One of the most noteworthy aspects of "Protection" is its introduction of the famous (or infamous) cry of "Jalapeña!" into Gargoyles. Keith David (who did the voice of Goliath) had the habit of using it as a periodic exclamation (having picked it up from a female jazz singer). Voice Director Jamie Thomason bet Greg Weisman that he couldn't write it into a script; Greg took him up on his bet and put it into Protection (introducing the set-up for it with the jalapeña peppers being brought into Dracon's suite and which Broadway helps himself to). Greg remained fond of the cry, though the rest of the crew and cast did not share his attitude.

Incidentally, Broadway uses "Jalapeña!" as an expression during his clash with Pal Joey and his bomb, before Goliath's own encounter with a jalapeña pepper that would provide the precedent for such an exclamation.

They cut out the first two appearances of the bombs. At the beginning, instead of following the camera into the suitcase to see the bomb, they cut away to Art and Lois outside just before the explosion.

Also, later we're supposed to see Pal Joey opening the briefcase at the dry-cleaners to check the bomb. Instead, we see him unlatch the case, and then slide it into the shop while relatching it. (Despite these cuts, they showed the bomb CLEARLY when Broadway took it away to dispose of it.)

Finally, at the end, they cut out some scenes between Elisa and Dracon's fight in the General Store--specifically, Elisa delivering a spin-kick to Dracon, and Dracon grabbing a sack full of flour and knocking her into the store shelves with it.