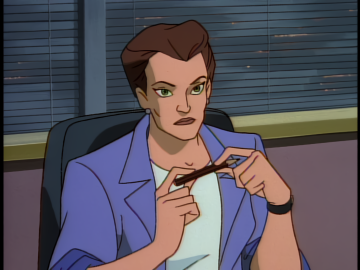 Captain Maria Chavez is Elisa's boss, the Captain of Detectives in the 23rd precinct.

Maria Chavez rose to her rank as Captain of Detectives at a relatively young age. She was involved in several police operations to apprehend Tony Dracon, which culminated in her going undercover as an immigrant running a dry cleaners, which Pal Joey attempted to blow up. ("Protection")

Early on during the World Tour, Elisa called Chavez telling her boss she needed some personal time. [2] When Elisa returned, Chavez was less than thrilled with her long absence, but it worked out well in her favor as she had a cop that Tomas Brod was unfamiliar with to send undercover into his syndicate. [3]

In October 1996, Captain Chavez temporarily transferred Elisa to the day shift to show a new transfer, Jason Conover the ropes. Chavez's leg was broken when the Hunters later blew up the Clock Tower, but she quickly returned to work. ("Hunter's Moon Part One", "Hunter's Moon Part Three", "Nightwatch")

Captain Chavez is a tough and efficient leader, and good friend to Elisa and her family. 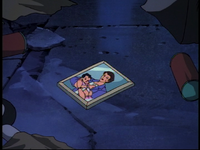 A photo of Captain Chavez and her daughter, from "Future Tense". 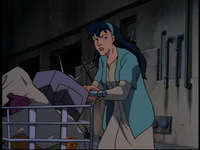 A daughter of Chavez’s appeared in Puck's illusion as one of the downtrodden humans living in the Xanatos-controlled New York City of 2036. ("Future Tense") Sonia Chavez does indeed exist in the Gargoyles Universe currently, most likely as a baby, although it is doubtful that her future will become quite so bleak. [7][8]

Captain Maria Chavez welcomed Captain George Stacy to the 23rd precinct where he wanted to report that witnesses saw a gargoyle involved in the Ravencroft breakout. After Chavez mentioned that being a cop now required "working knowledge of The Twilight Zone," she directed Stacy to Matt Bluestone and the rest of the Gargoyle Taskforce.

Appearance: "...For It May Come True"

In Goliath's dream (orchestrated by Titania), Captain Chavez told the 23rd precinct that the Mayor just declared gargoyles a public menace and called for volunteers to hunt them down. Detective Maza was one of the first to volunteer.