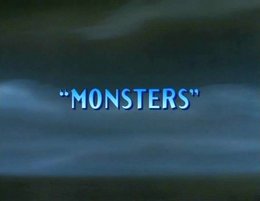 "Monsters" is the fortieth televised episode of the series Gargoyles, and the twenty-seventh episode of Season 2. It originally aired on November 28, 1995.

Angela is captured by Anton Sevarius at Loch Ness and befriends the Loch Ness Monster, Nessie, who has also been captured by Sevarius in order for him to use the creature's DNA to create his own monsters. Sevarius involves Angela in his plot to capture Nessie's mate Big Daddy, but Goliath, Elisa, and Bronx come to the rescue, and the Loch Ness monsters are liberated.

Angela learns from Sevarius that Goliath is her father.

Elisa is unsuccessful when she tries contacting Matt Bluestone about her predicament.

The DNA samples that Sevarius takes from Angela reappear in "Louse".

The Loch Ness Monster will have a brief cameo in "Rock and Roll", when Shari mentions the legend of how Saint Columba tamed it.

Brendan and Margot are among the passengers on the tour boat (even when they're away from New York on vacation, they can't stay away from the gargoyles, although at least, this time they didn't meet them face to face!).

Although the alpha-male Loch Ness Monster's name is given in the dialogue as "Big Daddy", and his reunion with Nessie parallels Goliath and Angela's reunion (as Angela herself comments at the end of the episode), Greg Weisman's own view on the matter was that the two "Loch Ness Monsters" were mates rather than father and daughter.

Sevarius initially believes Angela to be a member of a clan of gargoyles living in Loch Ness and looking after the "Nessies". He soon discovers his error, but according to Greg, an actual Loch Ness Clan does secretly exist in Loch Ness - though somehow it avoided coming into contact with both Goliath and his clan, and Sevarius and his henchmen, during the entire adventure! (Which also means that Demona was mistaken when she claimed that her clan during the events in the "City of Stone" flashbacks were the last surviving gargoyles in Scotland, aside from the six gargoyles frozen in stone sleep atop Castle Wyvern's battlements.)

The Xanatos Goon Squad name is coined by Elisa. All of the squad members (aside from Bruno) drown when the Loch Ness Monsters attack Sevarius' submarine, including the single female member.