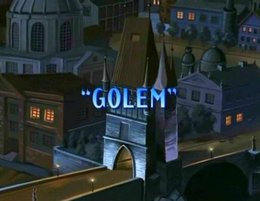 "Golem" is the forty-first televised episode of the series Gargoyles, and the twenty-eighth episode of Season 2. It originally aired on December 14, 1995.

Halcyon Renard hires the criminal Tomas Brod to steal the Golem from its guardian, Max Loew. Renard transfers his spirit into the large statue and goes on a rampage through Prague, terrorizing citizens and causing destruction. Goliath and Max Loew are able to convince Renard of his wrongdoing and he abdicates from the Golem. Loew leads the Golem to stop Brod and his gang.

Halcyon Renard and Preston Vogel appear for the first time since "Outfoxed". They next appear together in "The Gathering Part One", although Vogel appears on his own in "The Green". Renard is acknowledged in "Pendragon", having informed the Manhattan Clan]] of Goliath, Elisa and Bronx showing up in Prague.

Tomas Brod appears for the first time. He reappears in "Turf".

Renard gives Brod a Cyberbiotics hovercraft, which Brod still owns during the events of "Turf".

"Golem" is the only episode containing a flashback scene not connected to the series mythology or the lives of its characters; the flashback here is a simple dramatization of Rabbi Loew's original activation of the Golem in 16th century Prague, a simple adaptation of the original tale without any changes to accommodate Gargoyles elements into it (unlike the way that, say, "City of Stone" handled Macbeth's story). The production team felt the background both necessary and dramatic to an audience that likely would not be familiar enough with the legends pertaining to the Golem.

When Max Loew orders the Golem to spare Tomas Brod's life, he mentions "the words of our ancestors: 'Love justice, and do mercy.'" These words are not an exact Old Testament quote, but a close parallel to them appears in Micah 6:8: "and what doth the Lord require of thee, but to do justly, and to love mercy, and to walk humbly with thy God?"

Writer Gary Sperling's brother, a rabbi, advised him on the spoken Hebrew used in this episode. [1]

The final confrontation with Brod and his men takes place at a construction site. A sign over the building says "Konrock".

Some of the violence during the flashback is cut out, specifically an older man being attacked by a thug with a club during a pogrom. Also, some of the Angela/Golem fight is cut out.