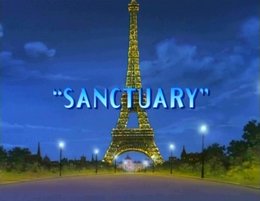 "Sanctuary" is the forty-second televised episode of the series Gargoyles, and the twenty-ninth episode of Season 2. It originally aired on December 18, 1995.

Thailog and Demona team up in Paris and devise a plot for Demona to marry Macbeth in her human guise, and then capture him so that the two gargoyles could inherit his fortune. Thailog works behind Demona's back and plans to have the two enemies kill each other so that he can collect the fortunes of both. The Avalon World Tour travellers are able to stop this from happening, but Thailog leaves with Demona, who is still none the wiser about his true motives.

Angela starts pressuring Goliath to regard her as his daughter.

Angela finds out that Demona is her mother.

Banquo and Fleance attend Macbeth and Demona's wedding (though without speaking roles). Margot briefly walks past Elisa while the latter is sight-seeing, though with no trace of Brendan about. (Is Margot still on a European vacation (as in "Monsters"), or is it just another lookalike character, such as the one in "City of Stone Part Two"?)

Macbeth and Demona appear for the first time since they were put on a skiff in "Avalon Part Three", although they have no memory of events since they were put under the Weird Sisters' spell in "City of Stone Part Four". In particular, Macbeth only learns that Demona now turns human in the day at the end of this episode, even though he previously witnessed the change in "High Noon".

Demona uses the alias of Dominique Destine for the first time.

Thailog appears for the first time since his introduction in "Double Jeopardy". He has used the money he stole in that episode to form Nightstone Unlimited with Demona as his partner. Their partnership will last until "The Reckoning".

Angela learns that Demona is her biological mother.

Thailog's alias for interacting with the human world (mentioned only in this episode) is "Alexander Thailog", which is significant since Xanatos's biological son will also bear the name of Alexander (and Thailog views Xanatos as one of his "fathers"). The fact that Thailog comes up with this name independently gives this scene a particularly eerie tone - though it can easily be explained as a result of his sharing Xanatos's ambitions and means of achieving them. The name itself is borrowed from Alexander the Great, the famous Macedonian conqueror - whose remarkable achievements would be an obvious source of inspiration to both Xanatos and Thailog.

Elisa's "This is a job for the gargoyles" line is a take-off on the catch-phrase "This looks like a job for Superman."

Sanctuary is also the title of a 1931 William Faulkner novel. Faulkner is one of Greg Weisman's favorite writers and his works were one of the influences on Gargoyles. [1][2]