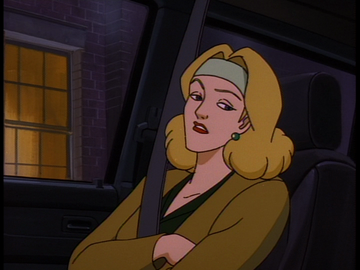 Margot Yale is an Assistant District Attorney in New York and an advisor to the NYPD Gargoyles Taskforce. She is currently married to Brendan Quarters.

Since 1994, Margot and her husband have sighted the gargoyles on numerous occasions, much to their alarm. The first time was when Goliath saved them from being mugged by three criminals. ("Awakening Part Three") On later occasions, the gargoyles have had other encounters with them; Goliath jumped on the hood of their car while fighting Fox in her were form, the Manhattan Clan rescued them from bank robbers who were holding them hostage, and again from muggers while they were riding the subway. They were even on holiday at Loch Ness when the Avalon world tour travelers arrived there, and their tour boat was attacked by Sevarius' miniature submarine. ("Eye of the Beholder", "City of Stone Part One", "Hunter's Moon Part One", "Monsters")

After the gargoyles were exposed to the world in late 1996, Margot was made an advisor to the NYPD Gargoyle Taskforce and appeared on Nightwatch as part of a debate on the "gargoyle problem", arguing against Macbeth. She wanted the gargoyles locked away to contain them, believing them to be merely savage monsters with no sentience (despite all the times she's been saved by them). Presumably, she continues to feel that way about them. ("Invitation Only", "The Journey")

On Halloween of 1996, Margot and Brendan attended Xanatos's Masquerade at the Eyrie Building. There, Margot, who was costumed as a flapper, talked to Lexington, even complimented him on his costume, thinking he was a human in disguise. ("Masque")

In the near future, Margot will likely be involved at Goliath's trial (where the court will have to consider the gargoyle's sentience). [2]

Margot Yale is very dismissive and condescending to her husband, Brendan Quarters, as well as to people or groups she disagrees with, such as Macbeth on Nightwatch.

Margot Yale acted on her hate at least twice such as when she prosecuted Goliath for armed robbery, but he was acquitted when he captured the true felon. ("And Justice For All")

Finally, she had her opportunity to incarcerate the surviving Gargoyles when it appeared the majority of the Clan was murdered in a grand trap designed by John Castaway. However, while Yale was accompanying Angela and Bronx (who were prisoners) on a passenger train, the Quarrymen, led by Castaway himself, attacked. When the Quarrymen made the train race out of control to kill everyone on it, Yale was stunned to see the Manhattan Clan, including the members who secretly survived, vow to save the train rather than escape. When they were successful, Yale had Castaway arrested and dropped all charges on the Clan while praising their heroism to the media. ("Angels In the Night")

Greg Weisman has said, about Margot's casting: "In my mind, Margot is always played by Marina. Tress is a wonderful actress of course, but Margot is Marina." [4]