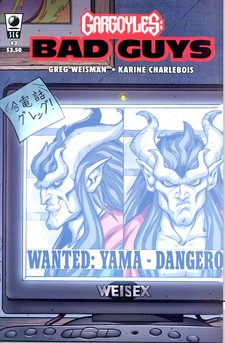 The Japanese gargoyle Yama has been banished from Clan Ishimura until such time as his lost honor can be restored. Truly alone for the first time in his long life, he becomes a target of the Hunter, a human who has spent her life training to destroy the gargoyle race. So when Hunter and her new teammates, Dingo & Matrix, catch up to him, Yama is offered no mercy - and a job?

"The Lost" opens where the framing adventure at the start of Chapter One left off. The Redemption Squad has survived the destruction of their helicopter thanks to Matrix, but is now under attack by a set of giant flying robots (each one bearing a number on his chest). Fang deserts (not surprisingly, knowing him). Yama tricks one robot into flying into a cliff (their programming is clearly not much better than the Steel Clan's), but another robot holds him against the rock wall and prepares to shoot....

The story then shifts to Tokyo, two months before, continuing the origin story begun in "Strangers". Yama has been banished from Ishimura for assisting Taro in his theme park scheme in "Bushido", until he has regained his honor - and he is to judge when that condition is to be achieved. It is clear that this will not be soon, for Yama will make no excuses or justifications for his behavior - if anything, is harder upon himself than the rest of the clan are. The scene where he parts with his mate, Sora, is especially moving (one of its highlights is the look of pain upon his face as he refuses to let her accompany him into exile).

In Tokyo, Hunter, Dingo, and Matrix, have tracked Yama down, and after a brief fight (in which Yama shows himself to be a formidable warrior, able to escape all the traps that Dingo and Matrix set for him), Hunter makes him an offer: join the Redemption Squad and regain his honor by helping it carry out its mission. Yama finds the idea appealing - until Hunter decides to add to the incentive by threatening his clan if he refuses. Fifteen seconds after she makes the threat, Yama has her on the ground with his sword at her throat, but Hunter remains unruffled, and finally persuades him to join.

In the meantime, a mysterious bearded man named Fred enters the Labyrinth in New York, makes his way to Fang's cell, and reveals himself as Sevarius in disguise (complete with the utterly Sevarian line, "It's time to meet your maker!"), an event which is somehow connected to the Redemption Squad's next mission...

Yama gets the focus in this issue, and his stiff, stern nature is well-portrayed here. But Greg Weisman does not neglect the other members of the Squad; all of them have great moments. A few that stand out:

The spin-off continues to make good progress, and I look forward to its succeeding chapters.

The post-it note pictured on the comic's cover features the Japanese phrase, "Ima denwa Gureggu!"("今 電話 グレツグ!"), which translates as "Now phone Greg!" Out of context and as written, it is unclear whether "Greg" (presumably referring to either writer Greg Weisman or cover artist Greg Guler) has made a call, or whether he is the one that needs to be called.

The "Weisex" brand monitor is probably another reference to Greg Weisman.

The first five pages show more of the Redemption Squad's mission from the Bad Guys Leica reel, whose adaptation began in the previous issue.

"Tengu" (a word mentioned by Hunter at the end of "Strangers") is revealed to be the Japanese word for "gargoyle", confirming the suspicion that the tengu (winged beings from Japanese legend) were a part-original for the Ishimura Clan in "Bushido".

Hunter alludes to Demona in her line "With one known exception, gargoyles do not choose to live in solitude".

This is another good issue for cameos. Vinnie briefly appears in Tokyo, on his way to Ishimura (and already lost). Brendan and Margot appear in a street scene in New York, and Al, Claw, and Shari all appear in the Labyrinth scene. Also, Gargoyles fans Greg Bishansky and Mara Cordova briefly appear in the New York street scene, Kanthara (the fan character of Karine Charlebois, this issue's penciller) in Tokyo, and Greg Weisman's son, Benny appears in the Labyrinth.