Benjamin is the name of one of the Tazmanian Tiger's pet thylacines. He was used by his master at a failed theft in Sydney, Australia. How the Tazmanian Tiger acquired him, considering the species has presumably been extinct for sixty years, remains unknown (although it has been hinted that he was the product of Sevarius's genetic engineering). ("Strangers", "Estranged") 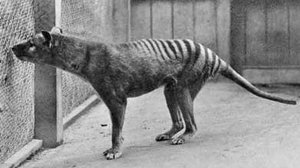 The last known surviving thylacine was named Benjamin and was kept in the Hobart Zoo in Tasmania until his death on September 7th, 1936. Benjamin's sex was unknown and "he" may have been a female. To commemorate Benjamin's death, Australia has held National Threatened Species Day on September 7th since 1996.