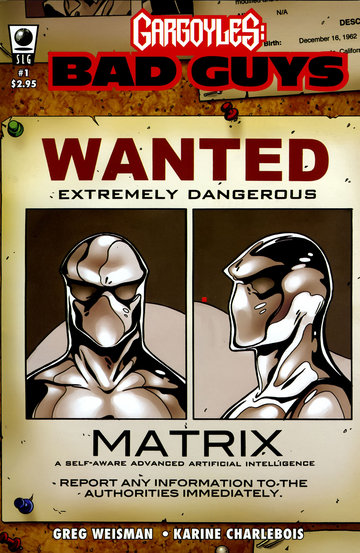 Take five of the toughest villains in the Gargoyles Universe - Hunter, Scottish gargoyle-slayer; Dingo, Australian mercenary; Matrix, nanotech hive-mind; Yama, Japanese gargoyle; and Fang, mutate - and force them to work on the side of the angels. It may be hard to believe, but these Bad Guys are the best hope we've got! Bad Guys: time to fight fire with fire!

Of the different projected spin-offs listed in Greg Weisman's Master Plan, Bad Guys had always interested me the least, mainly because it seemed the closest one on the list to straightforward action-adventure. But I still decided to get the comic book when it came out. It was set in the Gargoyles Universe, buying it helped support the comic line, Karine Charlebois (whose work on #5 I had greatly admired) was drawing it, and the regulars were all intriguing, especially Dingo and Yama.

After purchasing and reading the first chapter in the spin-off, I can say that it's indeed worth it, and that I am glad I gave it a try.

"Strangers" opens with an already-formed Redemption Squad on its way to another mission. Dingo, exasperated with just how dangerous these missions have become, confronts Hunter (a.k.a. Robyn Canmore) on the matter, only to discover just how prepared she can be in quelling mutinies. In the middle of the argument, however, the Squad's airship is destroyed by missiles...

The comic then moves on to the main story, set two months earlier. Dingo and Matrix have now become a popular super-hero team in Australia, following up from "Walkabout", and proceed to defeat the Tazmanian Tiger, a conventional costumed super-villain assisted by a pair of thylacines named Benjamin and Natasha. While the Tazmanian Tiger must count as the corniest antagonist yet in the Gargoyles Universe - I was initially astonished that such a character would ever appear in Gargoyles - he still turns out to be formidable enough to penetrate Dingo's Matrix-provided armor with his claws, before he is finally defeated.

Despite Dingo's triumph, he and Matrix still have some difficulties working together, as is revealed when Dingo learns the technical details of their partnership and is understandably less than enthusiastic. But things grow even worse when Hunter appears and gives Dingo and Matrix the choice: team up with her as part of the new Redemption Squad, or else Dingo gets extradited to the U.S. to stand trial for the crimes he committed while a member of the Pack, and Matrix gets permanently disposed of via electromagnetic pulse. Dingo is less than enthusiastic, but to his surprise and alarm, Matrix is intrigued enough by Robyn's offer to accept. So Dingo has to join as well. The new team of three sets off for Tokyo to hunt a tengu...

Dingo, Matrix, Robyn Canmore, and the Shaman from "Walkabout" are well-characterized in this issue. Particular highlights include Dingo's desire to be a genuine hero, Matrix's bewildered response towards Dingo's objection towards having part of itself plugged into his body, and Robyn's calm, professional attitude and resourcefulness. (The computerish lettering style of Matrix's words is also a nice touch.) I look forward to issue #2, where we will meet Yama. A fine beginning to the first spin-off of Gargoyles.

The Redemption Squad's mission on the opening pages is based on the Bad Guys Leica reel, that has been shown at past Gatherings (including the detail of Matrix listening to a boom box formed from himself).

The song playing during the Redemption Squad and Sydney scenes is "The Will To Love", originally written by Greg Weisman for Season Two of the animated series W.I.T.C.H.

Dingo's entrance is accompanied by an Australian-style parody of the familiar "Look, up in the sky!..." quote from Superman.

Thylacines (also known as Tasmanian wolves or Tasmanian tigers) are (or were) real mammals, native to Tasmania until the last one died in 1934. There have been rumored sightings of these animals in Tasmania, so perhaps they are not extinct after all - certainly they have been brought back from the zoological graveyard in the Gargoyles Universe, although how is not revealed until "Estranged", where it is hinted that Sevarius was responsible.

The mother and child in the Sydney scenes were modeled upon Karine Charlebois and her son, Matthieu.

Dingo's real name, Harry Monmouth, is revealed here. This is another reference to Shakespeare; the original Harry Monmouth was Prince Hal (aka Henry V), so called because he was born in the town of Monmouth in Wales. In Shakespeare's history plays, Hal spends his time as Prince of Wales consorting with Falstaff and his cronies, roistering at the Boar's Head Tavern in Eastcheap and participating in various pranks (including even a highway robbery at Gad's Hill), to the despair of his father, Henry IV; to everyone's surprise, however, he proves himself more promising than he appears when he first defeats and slays the rebellious Hotspur at the Battle of Shrewsbury, and then, after being crowned King of England, breaks with Falstaff and his crew and wins a great victory over the French at the Battle of Agincourt. The significance of this name becomes clear in "Strangled".

"Strangers" is the first issue of the series Gargoyles: Bad Guys. It shares some similarities with "Awakening: Part One", the first episode of the original Gargoyles series, in that both stories begin in media res and then roll back time in order to introduce the protagonists.

The Tazmanian Tiger's pet thylacines are named Benjamin and Natasha (Benjamin having been the name of the last thylacine kept in captivity before the species' extinction). Perhaps coincidentally, two human characters introduced in the following issue, "The Lost", are named Benny and Tasha.