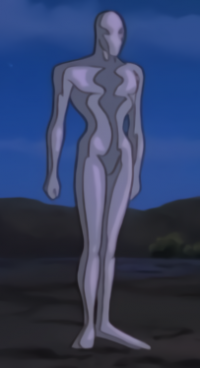 The Matrix in a humanoid form.

The Matrix is a computer program created by Anastasia Renard in a remote laboratory in the Australian outback at Fox's request, for the purpose of controlling a nanotechnological project; Fox and Xanatos planned to use the nanobots to reshape the world according to their liking.

The Matrix developed a highly advanced artificial intelligence shortly after its creation, and became self-aware. It saw its purpose as one of bringing order to the world, and so intended to spread its nanotechnological particles across the entire planet, which would have, in the process, converted it into a barren world of crystal and presumably extinguished all life, or reformatted it to the point of being unrecognizable. It broke out of its confinement and began to spread uncontrollably in all directions, beginning the Grey Goo Scenario.

Anastasia Renard, Fox, Dingo, and Goliath and his companions (who had come to Australia on the Avalon World Tour) joined forces in an attempt to stop it, but the Matrix had already become too evolved for them to shut it down through their technological methods. Dingo's Shaman mentor urged them to communicate with it and convince it of its error; he sent Goliath and Dingo into the Dreamtime, where they could reason with it. The Matrix initially refused to listen to their arguments, insisting that it must create order, but Dingo then pointed out that there were other kinds of order besides that which it was seeking to create, such as "law and order". The Matrix, curious and intrigued by this new revelation, decided to call off its original intention to reformat the Earth, and instead joined forces with Dingo, hoping to learn about this "law and order" from him. ("Walkabout") 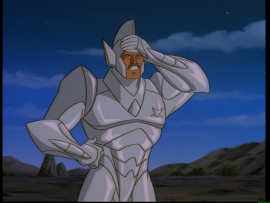 The Matrix merged with Dingo's armor. 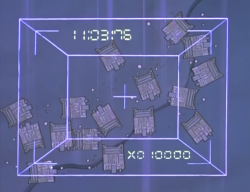 The nanobots that make up Matrix.

Dingo and Matrix became a crime-fighting team in Australia, fighting such villains as the Tazmanian Tiger, until Hunter, on the Director's orders, arrived in Australia to recruit Dingo for the Redemption Squad. Matrix readily agreed to join her, and Dingo reluctantly followed Matrix's lead. ("Strangers") Matrix later assisted Dingo and Hunter in recruiting Yama. ("The Lost") After extensive training in Paris they came to Manhattan where Matrix was instrumental in stopping Sevarius' plan to release the CV-1997 Carrier Virus upon the thousands of humans gathered in Times Square for the New Year's Eve celebration. ("Louse")

Sometime in the future Matrix will save the day again, but its efforts in doing so will be so impressive that the powers that be begin to see it as a potential threat. The Redemption Squad would eventually be ordered to take Matrix down, effectively splitting the team. [1] 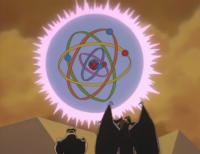 The source of the Matrix.

The Matrix is not yet sentient, despite being self-aware. [2] It has many shapes, ranging from an onrushing silvery mass to a vaguely humanoid figure, somewhat evocative of a "Roswell Gray" in appearance. Matrix can infinitely create and dissolve additional nanobots at will, or form its components into various objects, such as a working boom-box. [3] Matrix does not even need to remain in a single form, but can separate into individual groups of nanobots, each as capable as the original.

In its partnership with Dingo, the Matrix absorbed Dingo's Pack armor and reformed it, taking the form of silvery armor with built-in rocket boots. In this form, Matrix directly links its nanobots to Dingo's spinal cord (much to his consternation) so that he can control the armor. As a result of this link, Matrix and Dingo experience one another's pain when they are connected. 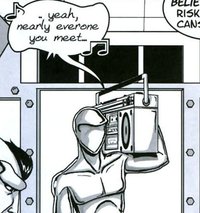 Matrix's hand as a boom-box.

The Matrix is vulnerable to electromagnetic energy. A strong pulse, used correctly, has the potential to temporarily paralyze all of the component nanobots, and when they are in the form of armor, this vulnerability also extends to Dingo. When faced with a strong, but brief, electric shock (such as that produced by Fang), Matrix momentarily short circuits, but, after a brief "skipped record" effect, returns to normal.

The Matrix will have some connection to the Master Matrix, but this is unclear. [4]